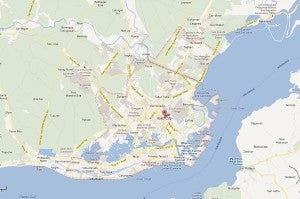 ILOILO CITY—Since she was a child, Ana Calunsod-Arquillo has known well a story told by her father, Cornelio, and handed down to at least eight generations: One of their ancestors—a young boy—had died with a priest on a Pacific island centuries ago.

The story goes that a 7-year-old boy disappeared after he boarded and hid in a Cebu-bound Spanish ship docked near what is now Molo District in Iloilo City. When he was discovered by the crew, a priest took him under his care.

The Calunsod clan of Molo believes that this boy was Blessed Pedro Calungsod, who is being canonized at the Vatican Sunday as the second Filipino saint.

Arquillo, the seventh of 11 siblings, says Pedro was the son of Rufo Calungsod, a goldsmith. Rufo is a namesake of her great-grandfather, who was also a goldsmith. She also has a brother named Rufo.

“We know that there are several other claims on Pedro’s roots, but we know deep in our hearts that he was from here and he was our ancestor,” says Arquillo, 63, a retired businesswoman.

The claim is supported by a Western Visayas historian, lawyer Rex Salvilla.

“The information that I have gathered and the circumstances during Pedro’s time point more to the claim that he was from Molo,” Salvilla said.

Salvilla, past president of Iloilo Historical Association and president of West Visayas Historical Research Foundation Inc., researched the background of the Visayan martyr in the late 1990s at the request of then Molo parish priest Felipe Parian.

Parian had been directed by the late Jaro Archbishop Alberto Piamonte to conduct inquiries among the Calunsods in Molo about their possible relationship to Pedro Calungsod.

The other possible origins of Calungsod in Iloilo are the towns of Leon, Tigbauan and Oton.

Salvilla confirms the account of Fr. Catalino Arevalo in the pamphlet “Pedro Calungsod, Young Visayan Proto-Martyr” of an oral tradition passed from generation to generation among the Calunsods in Iloilo.

A “Calungsod boy went from Iloilo to Mactan Island in Cebu, joined the Jesuit missionaries who left for some island in the Pacific, and was killed with the Fathers,” Arevalo’s account goes.

Family elders told Salvilla that the family name of their ancestors during the Spanish time was “Calungsod.” This was confirmed by birth certificates at Molo Church, according to Salvilla.

The elders explained that the spelling of their last name was changed to avoid conscription into the Spanish colonial army and the guardia civil (national police).

Salvilla said the conscription was done through quintos, an annual raffle where the names of native males aged 18 and above were listed and drawn. Those whose names appeared in the fifth draw were recruited.

“To avoid being recruited, people slightly changed their surnames, like ‘Salazar’ to  ‘Salarza’ or ‘Salard’ to ‘Saladar,’” Salvilla said.

The elder Calunsods said many of their ancestors fled to neighboring Negros Island to avoid conscription.

Salvilla said it was possible that children of the early Calungsods migrated to Cebu and Bohol islands from Negros. The change in the spelling of their surname from “Calungsod” to “Calunsod” could also have been the result of the corruption of names that stemmed from the difficulty the Spaniards had in pronouncing “ng.”

He cited the renaming of places in Panay, including of Ilong-Ilong (Iloilo), Ogtong (Oton), Batang (Batan), Jamindang (Jamindan) and Pangdan (Pandan).

Salvilla’s research showed that many members of the Calunsod clan lived in Barangay San Antonio in Molo. There is a road in the village called La Compania Street, believed to be originally named La Compania de Jesus (Society of Jesus) where a Jesuit mother house may have once stood.

The Jesuit presence in Iloilo during the early years of the Spanish rule was also well established. Salvilla cited the first school for boys in the country, built in Tigbauan town in 1652 by Fray Pedro Chirino, a Jesuit.

Salvilla said Pedro Calungsod could have been taken by the Jesuit priests to Cebu, being the religious center at that time covering the Visayas and Mindanao, before he went with the mission to Guam.

Arquillo said she hoped that the truth about Blessed Pedro’s roots would be settled one day. “But we are happy all the same that we will have a saint so close to us Visayans,” she said.

Arquillo bought plane tickets to attend the canonization ceremony at the Vatican, but a pressing business engagement forced her to drop her plan. Three of her cousins from Iloilo and four from the United States, however, are in Rome for the event.

Arquillo also plans to install a life-size statue of St. Pedro in a chapel on Barangay San Antonio Street that she herself had donated. The image will be similar to the one she gave to the Molo church six years ago and displayed at the compound.

“My father, who had always believed in the story of our boy ancestor, would be happy now,” she said.