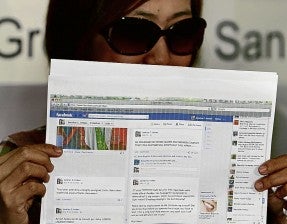 A nurse shows a printout of the Facebook post that she liked, leading to her being terminated by a government-run hospital in Taguig City in August. Forty other nurses who liked a volunteer doctor’s posts that were critical of the hospital and its officials were fired in August. MARIANNE BERMUDEZ

MANILA, Philippines – Four of the 15 Taguig hospital nurses previously fired over a Facebook “like” have been rehired after being made to sign a “pledge of loyalty” stating they would not speak out against the city administration again.

The 15 nurses were sacked last August after they “liked” a Facebook post of Dr. Jocelyn Imbao, a volunteer doctor, that criticized the hospital management’s decision to purchase a CT Scan machine despite lack of basic supplies needed to treat patients.

The nurses were given their termination letters on August 15 which simply stated “we regret to inform you that after careful deliberation, we have decided to terminate your services effective August 16, 2012.”

Doctor Roberto Abat, Medical Director of the Taguig-Pateros District Hospital, told the nurses who came to him that it was the city administration’s decision to fire the nurses and it was because of the “Facebook issue” that was critical of him. One of the nurses managed to record their conversation, a copy of which was provided to INQUIRER.net.

Imbao disclosed in a phone interview Friday that the four rehired nurses were made to sign a “pledge of loyalty” to be given their job back. It was a pledge that they would no longer be vocal against the city administration and that they would remain loyal and faithful, she said.

She added that the nurses, whose certificates of employments (COEs) have been withheld since they were terminated, have been contacted allegedly by “emissaries [of city hall] asking them what kind of COE they want.”

It appears that the nurses were being approached one-by-one and giving them what they want to make them keep quiet about the issue, Imbao said.

Abat had also previously told the nurses that they write a letter of appeal to the mayor explaining their extent of participation in the “liking” of Imbao’s Facebook status and admitting they were wrong. The nurses complied but their letter was not acted upon.

Imbao also said that the hospital has been quickly procuring basic supplies and conducting repairs in the hospital ever since the issue came out in the media about her criticisms of the hospital’s mismanagement.

“They can now disprove that there are lack of [basic] supplies,” she said.

The Tagiug City Administration had previously issued a statement denying Facebook was the reason behind the termination of the nurses.

“These terminated personnel have manifested blatant disobedience and disregard of authority and protocols, engaged in sowing intrigues and encouraged discontent among the hospital’s staff and personnel,” Atty Marianito Miranda, head of the Taguig city legal department, said in their statement.

Taguig Mayor Laarni Cayetano had also stated the nurses were fired because they were “incompetent,” a charge one of the nurses denied by showing her evaluation papers that gave her a grade of “very satisfactory.”

The statement also added that there was legal ground for their termination. “There exists no employer-employee relationship between these personnel and the City as confirmed by the Civil Service Commission itself. Moreover, these personnel’s service contract provides that it can be terminated anytime upon written notice,” the statement said.

Miranda and Taguig Public Information Office head Darwin Icay could not be reached for comment as of this writing.

Representative Teddy Casiño and several other congressmen had earlier filed a resolution in the House of Representatives calling for a congressional inquiry into the issue of the Taguig nurses.

“If the nurses are contractual, they should be accorded due process for them to answer the charges and complaints against them,” Casiño said in their statement.

He urged the House committee on civil service and professional regulation to conduct an inquiry about the nurses COEs being withheld and that they were terminated immediately.

Imbao said that the remaining 11 nurses are currently speaking with their lawyers to get advice on what legal actions they could take.