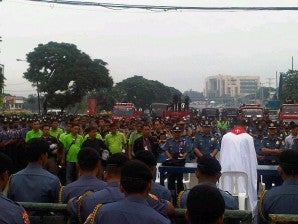 SEEKING DIVINE GUIDANCE. Policemen and their officials hear mass early Monday before they are deployed to secure the areas leading to Congress at the Batasan Pambansa where President Benigno Aquino III will deliver his second State of the Nation Address. Kate Evangelista/INQUIRER.net

Carlos added that their main focus would be the traffic that the protesters would cause.

The northbound lane of Commonwealth Ave starting from Ever Gotesco Mall was blocked off to give way to the rallyists.