Traffic build up on southbound lane of Commonwealth Ave. in QC 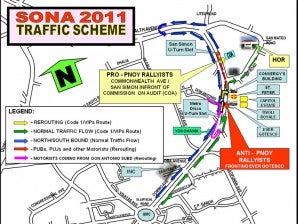 Traffic rerouting scheme on Commonwealth Avenue for Monday, when President Benigno Aquino delivers his second State of the Nation Address in Congress. Image courtesy of PNP

MANILA, Philippines – Traffic is building up on the southbound lane along Commonwealth Avenue in Quezon City, which has been opened to counterflow traffic as the northbound lane was closed ahead of President Benigno Aquino III’s State of the Nation Address Monday afternoon, 990AM has reported.

Along Chino Roces Avenue, traffic continues to be smooth as of posting time.

Meanwhile, workers are expected to gather at Tandang Sora in Quezon City at 8:30 a.m. and march to the Batasan Pambansa where President Benigno Aquino III is expected to deliver his second State of the Nation Address at 4 p.m.