Breast cancer is the most prevalent in PH 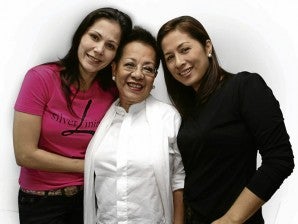 Breast cancer survivors (from left) Maritoni Fernandez, Bibeth Orteza Siguion-Reyna and Melissa de Leon. Breast cancer has overtaken lung cancer as the most prevalent form of cancer in the country, the Philippine Society of Medical Oncology said on Wednesday, Oct. 17, 2012.

MANILA, Philippines—Breast cancer has overtaken lung cancer as the most prevalent form of cancer in the country, the Philippine Society of Medical Oncology (PSMO) warned Wednesday.

“So, we are number one for breast cancer in Asia. Three out of 100 (Filipino) women will get breast cancer before age 75 and one out of 100 will die before reaching 75,” Lapus said at a PSMO press conference in Edsa Shangri-La hotel in collaboration with pharmaceutical giant Roche.

“(Breast cancer accounts) for 15 percent of all new cancer cases (in the Philippines) for both sexes and eight percent of all cancer deaths. So, you can just imagine the magnitude of the problem,” Lapus said.

With these distressing statistics, Lapus emphasized the importance of women checking their breasts for lumps every month and to have them checked by their physicians annually.

“We can’t stress enough the importance of early detection in breast cancer management. This is especially true now when there are options for treatment that weren’t available to everyone before,” she said.

Lapus said that PhilHealth, under its “Z Package,” now provides P100,000 for members who are in the early stages of breast cancer. They also need not go to Manila if they are in far-flung areas as PhilHealth has designated hospitals across the country where people with breast cancer can seek treatment.

“The earlier the cancer is detected, diagnosed, and treated by the team of medical oncologists the better the success rates. Treatment for early breast cancer, stages 0-3, is very important in terms of survival,” she said.

Doctor Corazon A. Ngelangel, of the Philippine General Hospital, said doctors were still trying to find out why breast cancer had overtaken lung cancer as the most common form of cancer in the country.

Read Next
MILF gave up claim to Palawan—Aquino
EDITORS' PICK
PH logs 665 new COVID-19 cases, lowest since July 2020
Gov’t eyeing COVID-19 vaccine booster for essential workers, indigents by Dec. 10
Villar Group gears up for AllValue Shopping Party on Dec. 3; around P 1-million promos and discounts up for grabs
Omicron poses ‘very high’ global risk, countries must prepare–WHO
A delightful blessing!
Legarda: Ending Violence Against Women, a cause for all
MOST READ
Quiboloy warns of ‘much worse than Omicron virus’ if his ‘persecution’ is not stopped
Bongbong Marcos’ conviction in tax case not a crime involving moral turpitude — lawyer
Omicron poses ‘very high’ global risk, countries must prepare–WHO
Marcoleta defends pol ads on ABS-CBN
Don't miss out on the latest news and information.