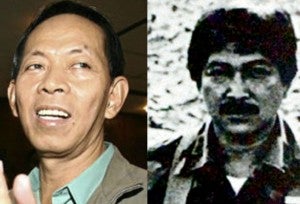 MANILA, Philippines—Will fugitive retired general Jovito Palparan be given the same VIP treatment by the military as a recently “surrendered” fugitive retired Air Force colonel who is a key suspect in the notorious Olalia murder case?

The family of the slain labor leader, Rolando Olalia, on Tuesday denounced the continued detention at the Fort Bonifacio Army headquarters of Eduardo “Red” Kapunan, one of the alleged conspirators in the 26-year-old murder who reportedly surrendered to the military last week after almost three decades of being on the lam.

The murder of Olalia and his driver, Leonor Alay-ay, is believed to have been a consequence of the violent power struggle that followed the first Edsa People Revolution. The main suspects in the killing were soldiers and officers belonging to the Reform the Armed Forces Movement (RAM), a key participant in the people’s uprising that brought down the dictator Ferdinand Marcos in 1986 and which attempted to grab power by launching several violent coups against the Cory Aquino government.

Kapunan, one of the 13 RAM leaders and members charged with the murder who managed to elude arrest for almost 30 years, reportedly surrendered last October 6 and has been in military custody since, an arrangement that the Olalia family has protested as illegal as the law provides that suspected criminals be booked by the police and held in civilian jails.

Lawyer Edre Olalia, a human rights lawyer who is a cousin of the murdered labor leader, reiterated Tuesday that Kapunan’s continued detention at the Army headquarters in Fort Bonifacio was highly irregular as it was not covered by any court order.

He said Kapunan, a founding member of the RAM, was “staying home at [the] military barracks instead of a regular civilian detention jail.”

The lawyer expressed concern that the fugitive Palparan, tagged by activists as a “berdugo” (butcher) for his alleged involvement in the disappearance and murder of several leftist activists, would receive similar treatment when he emerges.—With Kristine Felisse Mangunay