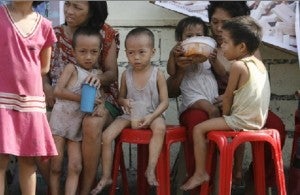 The number of undernourished Filipinos increased by two million in the past two years, according to a study conducted by international food and agricultural organizations. INQUIRER FILE PHOTO

MANILA, Philippines—The number of undernourished Filipinos increased by two million in the past two years, according to a study conducted by international food and agricultural organizations.

“The State of Food Insecurity in the World 2012,” a global assessment of nutrition levels, showed that 16 million Filipinos are considered undernourished from 2010 to present.

This figure represents an increase from the 14 million recorded between 2007 and 2009, and also indicates a rise in malnutrition rates out of the total population: 17 percent in the past two years, up from 15.9 percent in the earlier assessment period.

The study, jointly undertaken by the United Nations Food and Agriculture Organization (FAO), the World Food Programme (WFP) and the International Fund for Agricultural Development (Ifad) and released to commemorate World Food Day on Tuesday, found that one in eight people or 870 million all over the world, “do not get enough food to be healthy and lead an active life.”