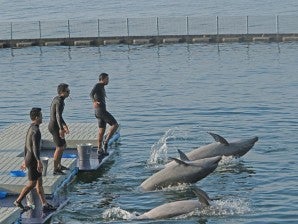 THE MARINE theme park Ocean Adventure is a major tourist draw at the Subic Bay Freeport. Animal trainers at the park guide visitors during their encounters with dolphins. ROBERT GONZAGA / INQUIRER CENTRAL LUZON

SUBIC BAY FREEPORT—The filing of charges and the protests and other forms of publicity against marine park operators who engage in the display of marine animals are nothing more than fund-raising activities, an official of the marine theme park Ocean Adventure here said.

Last week, the Quezon City Regional Trial Court (RTC) issued a 72-hour temporary environment protection order preventing the reexport of the dolphins in the holding facilities of Ocean Adventure, a locator of the Subic Freeport.

Quezon City RTC First Vice Executive Judge Bernelito Fernandez granted a petition of animal welfare groups for the issuance of a temporary environment protection order against the Department of Agriculture (DA) and the Bureau of Fisheries and Aquatic Resources (BFAR) officials.

The order prevents the government officials from issuing permits to reexport 25 Solomon Islands dolphins to Singapore.

The petitioners were the Earth Island Institute (EII), Philippine Animal Welfare Society (PAWS) and the Compassion and Responsibility to Animals (Cara) Welfare Philippines.

Timothy Desmond, president of Ocean Adventure, said his company was holding the animals owned by Resorts World Singapore (RWS), but he declined to give other details, citing a nondisclosure agreement with RWS.

Desmond accused the petitioners of using the issuance of the protection order as a fund-raising mechanism. They “were out to economically damage us for their promotional activity,” he said.

“This is a final effort by EII to try to block what is a legitimate transaction. They need that controversy to make their money. Their primary source of revenue is activist campaigns launched against legitimate public display [companies] like Ocean Adventure and Resorts World,” Desmond said.

Asked why the dolphins are in the Ocean Adventure, he said: “Typically, when you do a new project, you don’t bring animals directly to the facility. It takes a while to stabilize them and the Resorts World facility is still under construction.”

“[The dolphins were taken to Ocean Adventure] where we have a good, healthy place for the animals to live while their home is being completed,” he said.

Desmond said the dolphins were being trained in a separate holding facility and were not appearing in Ocean Adventure shows.

The theme park draws more than 500,000 visitors each year, making it one of the biggest tourism operators in Central Luzon, according to Subic Bay Metropolitan Authority records.

Desmond said the display of the marine animals in Ocean Adventure “is connected together by a theme of conservation of these animals.” He declined to disclose the number of marine animals that the facility was keeping but said it has Pacific bottlenose dolphins, rough-toothed dolphins, South American sea lions, false killer whales and sea turtles.

Ocean Adventure is also involved in the rescue of stranded marine animals in the area and has trained government workers and private organizations on the handling of these animals, he said.

Asked why the animals are not left in the wild, Desmond said: “It is because you won’t see them and you won’t learn from them—and so you won’t save them. The whole idea of public display—not just dolphins, any kind of animal—is that man needs a cultural lens through which he can experience wildlife and nature in a setting that is safe for the animals and the people.”

He said the dolphins in Ocean Adventure were being trained for their final destination in Singapore, “where their records for taking care of these animals is just off the charts.”

“And so this controversy is nothing but competing business interests of groups like EII and ourselves. It’s just that they are really media-savvy organizations, which rely on publicity to make their money,” Desmond said.

Read Next
Father of Inquirer bureau chief dies
EDITORS' PICK
Look Through: Super Typhoon Karding barrels through parts of Philippines
Motorcycles, smartphones, and cash prizes up for grabs in TNT’s ‘Tuloy Ang Saya’ Raffle in Mindanao
Do all the things you do, faster
POGOs not linked to Illegal online gaming, says Pagcor
House energy committee chair Arroyo bats for cheap electricity
Metro Manila now at moderate risk for COVID-19 — DOH
MOST READ
Robredo supporter tackles elephant in room: No massive fraud in 2022 polls, surveys were just right
Comelec invalidates win of sitting governor in Negros Oriental
DepEd: We are in a crisis situation in education sector
Lives destroyed as armyworms invade Philippine ‘onion capital’
Don't miss out on the latest news and information.