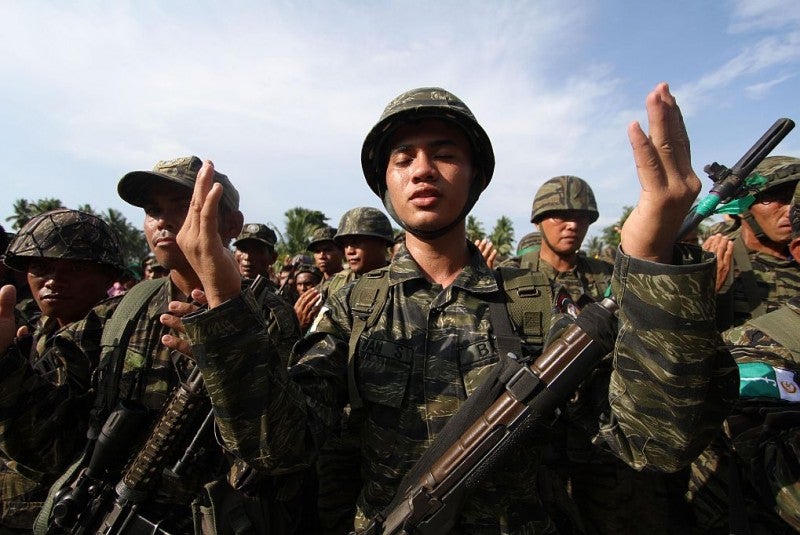 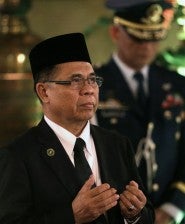 President Benigno Aquino III said the agreement will lead to positive changes and “we now all share the triumph of this agreement.”

“Today we signed an agreement that can finally see, genuine lasting peace in Mindanao,” Aquino said.

“This agreement marks a new chapter in history.”

The agreement was the first major step toward a final settlement that grants minority Muslims in the Mindanao broad autonomy in exchange for ending the violence that has killed tens of thousands of people and crippled development. Many of the rebel leaders interviewed said a lot of work lies ahead in convincing Filipino Muslims to accept a new administrative region.

Describing the deal as “a chance to restore dignity” to Mindanao, the Malaysian leader vowed to support the pact: “We will stand with you to make this agreement work.”

“I congratulate all who made this possible,” Razak said.

But Razak warned that the deal “will not save a life unless all parties stand on the principles on which this agreement rests.”

“This marks beginning of era in Southern Philippines. I look forward to the final agreement. After decades, peace is within reach,” he said.

The 13-page document outlines general agreements on major issues, including the extent of power, revenues and territory granted for a new Muslim autonomous region to be called Bangsamoro.

It calls for the establishment of a 15-member Transition Commission to draft a law creating the new Muslim-administered region. The 11,000-strong rebel army will be deactivated gradually “beyond use,” the agreement says, without specifying a timetable.

Murad reminded everyone of the root of the Moro rebellion.

“Never in my wildest dream since I was a child, or when I joined the Bangsamoro struggle more than 40 years ago, that one day I will see the interior of this building (Malacañang) that once housed the Spanish and American governors-general, and now the Presidents of the Philippines,” said Murad.

Explaining his presence at the seat of power of the Christian-dominated country, he said he was mandated by the Bangsamoro people to “witness a historic agreement” for a “just and enduring peace in the Bangsamoro homeland.”

In one sentence, Murad summed up the historical context of the Moro struggle for self-rule.

“We have seen the loss of our traditional Moro sultanate, the starvation of our sovereignty as a free Moro nation, and consequently our relegation into a state of captivity that eradicated our Bangsamoro identity, and reduced our ancestral homeland into small parcels of gerrymandered territories called provinces,” he said.

This, he said, “led to the marginalization our people within a larger dominant Philippine society that verily took cognizant, if at all, of our forebears and unbroken struggle for freedom even before the Philippine republic saw the light of the day in 1898 and 1946.” 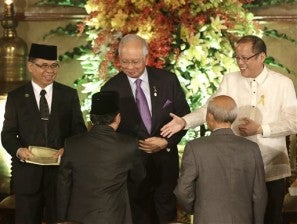 However, he said that Salamat had decided to “engage in peaceful negotiations” in 1997, believing that a “negotiated political settlement is the most civilized and practical way to solve the Moro problem.”

“Today … we have stayed the course. Our perseverance has prevailed over those whose position is to perpetuate war and conflict in Mindanao and Sulu for personal aggrandizement,” said Murad, noting 16 years of peace table negotiations resulted in a peace accord.

In response, the President understood that many had resorted to “the path of vengeance and violence,” but he vowed to dismantle the culture of impunity in the country.

“I myself lost my father to an oppressive system; I myself thirsted for justice, and was deprived of it then by the dictatorship. I empathize with our Bangsamoro brothers and sisters, and can only vow to work as hard as I can to see that the culture of impunity is dismantled, and that the foundations of righteousness and cooperation are laid,” he said.

“We will give our people what is truly due them: a chance to direct their lives towards advancement in a democratic, peaceful, and safe society,” he added.

The President claimed that the agreement did not only mark a new chapter in the country’s history.

“It now defines the very path we take as a people—one where opinions are heard and hope is shared; where understanding and consensus breed meaningful solutions for all stakeholders; one where every child is offered the opportunity to shape his own destiny,” said Aquino.

He again thanked Najib and his countrymen “whose commitment to our peace process shone as a beacon of peace to the international community,” and Tengku Dato’ Ab Ghafar Tengku Mohamed, the Malaysian facilitator of the talks, “whose wisdom and experience served as a bridge towards mutual understanding.”

Muslim students gather at a square in Cotabatto city in southern Philippines in support of the tentative peace-signing agreement between the government and the Moro Islamic Liberation Front at Malacanang Palace in Manila, Philippines, Monday. AP PHOTO

“He led not with dogmatism or hardened ideology, but with a flexibility and open mindedness borne of trust. We all owe him our collective thanks,” said Aquino of Murad.

He did not finish his speech without issuing a challenge to the panels tasked to complete the annexes of the agreement.

“Much work remains to be done in order to fully reap the fruits of this framework agreement. We have commitments to fulfill, people to lead, and dreams to achieve. The details to be laid out in the annexes, in particular, provide us with a solid opportunity to expand the common ground whose principles we have already articulated through the agreement,” said the President.

“The Filipino people share this victory with you. Together, we move forward with a conviction to lift each other, so that in turn, our nation may grow and reach greater heights. We implore God, or Allah, to continue guiding all of us, so that our dreams may turn into concrete, tangible realities,” he said.

“Let me tell you that no doubt the framework agreement on the Bangsamoro is the best possible peace pact that can be signed by the parties. Pushing them too far will be like asking them to tread the pathways of independence or send them to the brink of war,’’ Iqbal told reporters after signing the agreement with government chief negotiator Leonen in Malacañang.

While it was historic and substantive, the framework agreement that serves as a blueprint for a final agreement that will set up an autonomous Moro homeland was still a “piece of paper,’’ Iqbal said in the joint briefing with Leonen at the New Executive Building.

“It will not implement itself. It requires the sincere intervention of the parties to the negotiation and the all-out support and proper leverage of the friends of the peace process — both local and international –and, without saying, members of the media before we can ensure that this agreement will be fully implemented,’’ he said.

Leonen, responding to this, agreed that it was only a framework agreement but it contained the roadmap to the final peace agreement.

Leonen said both panels would begin exploratory talks on the annexes in November in the hope of crafting a final agreement “before the end of the year.’’

Iqbal declined to discuss his expectations of the future discussion on the annexes of power and wealth-sharing and normalization. He said these were still being “negotiated.’’

“You know, I do not want to pre-empt the result of the technical working groups who are negotiating on the details of power and wealth sharing,’’ he said, when further pressed on the details.

“We have to discuss that. We will present our position. The government will have to present their counter position and let us see what will happen,’’ he said.

Relatedly, under the agreement, the Armed Forces of the Philippines would turn over its law enforcement functions to a reformed police force, Leonen said.

“There is something in the agreement which might assist in terms of determining the form and the function and the relationships of the policing in the area and that is called the Independent Review Commission,’’ he said.

The commission, composed of representatives and experts, would examine best practices in reforming the police, Leonen said.

Now that the engagement with the government has reached a more complex level, Iqbal admitted that it would be difficult for the Moro rebels to proceed.

“They are used to fighting; they are not used to governance. So it would be very difficult for us. But with the help of the friends from the  peace process, and international community, we have to empower our people,’’ he said.

On the government side, Leonen said the challenge lay with bringing the matter to Congress and the local government units every step of the way, and explaining it before the international community.

Reaching out to Misuari

Leonen said the Transition Commission would include members of the MNLF. Iqbal said it has a shortlist of the eight-man team to the commission, but declined to identify those in the shortlist.

“He’s not joining,’’ Iqbal said when asked if it was wise to include Misuari in the list. “He denounced the agreement.’’

“ In the whole day of Oct. 6, there was no plenary session except the opening and maybe the third reading of the whole document. It was all—the most contentious is about policing. We were about to give up if not for the perseverance of both parties and the creativity of the Malaysian facilitator. It was 10:40 in the evening when we had a deal,’’ Iqbal said.

“You know, when we finally find the real solution or the real medicine all the sufferings will fade away,’’ Iqbal said. He said there was a mechanism to address the BIFF problem.  With a report from AP