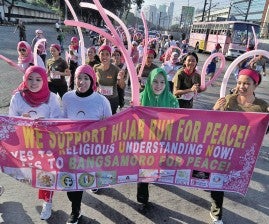 Proposed memorandum of agreement on ancestral domain, or MOA-AD, calls for a Bangsamoro Juridical Entity (BJE) with its own “basic law,” police and internal security force, and system of banking and finance, civil service, education and legislative and electoral institutions, as well as full authority to develop and dispose of minerals and other natural resources.

The BJE includes the Autonomous Region in Muslim Mindanao (ARMM); six municipalities in Lanao del Norte; hundreds of villages in the provinces of Sultan Kudarat, Lanao del Norte and North Cotabato, which voted in 2001 to become part of the ARMM; and parts of Palawan.

Sept. 3—Violence prompts Malacañang to announce that it will not sign the MOA-AD and dissolve its peace panel.

Aug. 31—The President announces that Malaysia will remain facilitator of the talks.