Pope to be given statue of 2nd Filipino saint 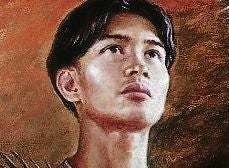 MANILA, Philippines – Pope Benedict XVI will receive a statue of Blessed Pedro Calungsod as thousands of Filipino pilgrims flock to Rome for his canonization on October 21, church officials said Friday.

Henrietta de Villa, secretary general of the National Commission on the Canonization of Blessed Pedro Calungsod, said one of the three statues of the 17th century Filipino martyr to be taken to Rome from the Philippines would be given as a gift to the Holy Father.

“One image will be given to the Holy Father.… When (Calungsod) was beatified (in 2000), we also gave an image of Calungsod to (the late Pope John Paul II),” De Villa said.

The image to be given to the Holy Father is two feet tall and shows Calungsod holding a palm leaf and the Book of Christian Doctrines with his right foot forward.

“This was the idea of (retired) Cebu Archbishop Ricardo Cardinal Vidal and priests. (They said) Pedro Calungsod should be presented as somebody who is dynamic,” said Fr. Marvin Mejia, assistant secretary general of the Catholic Bishops Conference of the Philippines.

“He is on the move because he is a missionary,” Mejia added.

De Villa said the second image of Calungsod would be given to the Pontificio Collegio Filippino—the school for Filipino priests in Rome—while the third statue will be used for the “Duaw Nasud” or the planned “pilgrimage of thanksgiving” around the country.

“The Holy Father will bless it. It would be brought back to the country for a pilgrimage of thanksgiving on Oct. 25,” De Villa said.

She said the pilgrim image would be brought to the University of Santo Tomas in Manila for an overnight vigil.

Meanwhile, Mejia said, thousands of overseas Filipino workers from across Italy were expected to descend on Rome for the canonization. There are at least 100,000 Filipinos working in Italy.

“This is really going to be a moment of great pride for us Filipinos,” Mejia said.

He said around 5,000 pilgrims from the Philippines would attend the event, including around 30 Filipino bishops led by retired Manila Archbishop Gaudencio Cardinal Rosales, Vidal, and CBCP president and Cebu Archbishop Jose Palma.