Obama ‘could not be prouder’ of Biden after debate 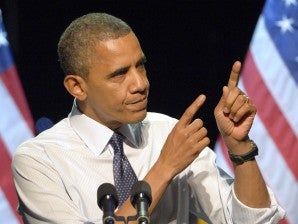 ANDREWS AIR FORCE BASE– US President Barack Obama said Thursday he “could not be prouder” of Joe Biden after his vice president clashed with Republican Paul Ryan in a fiery debate in Kentucky.

In an unusual statement delivered under the wing of Air Force One, Obama said he especially appreciated Biden’s strong defense of the middle class in the debate, which crackled with passion and argument.

ADVERTISEMENT
FEATURED STORIES
NEWSINFO
Drivers now required to take driver’s education upon license renewal – LTO
NEWSINFO
Marcos Jr’s ‘special diploma’ from Oxford: You can have it, too
NEWSINFO
Don’t do that: Robredo to supporters calling to boycott restos supportive of Marcos