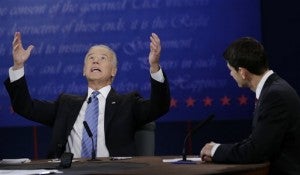 DANVILLE, Kentucky—Vice President Joe Biden says his administration has the toughest sanctions in history on Iran, even as his Republican rival says the White House has no credibility on the issue.

Biden said at the vice presidential debate that he is “quite confident” the administration could deal a serious blow to Iranian’s nuclear ambitions.

The vice president called Ryan’s criticisms of his foreign policy a “bunch of malarkey,” but Ryan contended he would stand up for Israel.