The 24-year-old beauty from General Santos City, who also is an architecture board exams topnotcher, will represent the country in the Miss Universe pageant in Brazil in November. 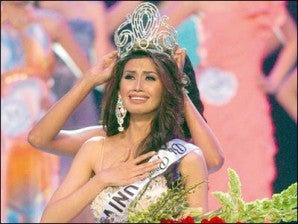 CROWNED Shamcey Supsup is crowned Binibining Pilipinas-Universe 2011. She will represent the Philippines in the Miss Universe beauty pageant to be held in November in Brazil. ARNOLD ALMACEN

Her victory came as no surprise. Early in the competition, she received three special awards—Miss Talent, Miss Philippine Airlines and Miss Cream Silk.

Donning three sashes and clasping bouquets in her arms, Supsup gained more confidence even before the swimsuit and evening gown competitions started.

Hugh Wilson, consul general of the Australian Embassy, asked Supsup during the question-and-answer portion what worthy cause she supported.

“Valuing education,” she replied. “You can have money. You can have fame. But in the end it can be taken from you. But education is something that cannot be taken away from you.”

Her response was punctuated with a thunderous applause from the audience at the Araneta Coliseum.

Supsup took home a P500,000-management contract from Binibining Pilipinas Charities Inc. (BPCI), P50,000 from Cream Silk, a trip for two to the United States, as well as products and services from pageant sponsors.

Isabella Manjon, a 24-year-old nurse, bagged the Binibining Pilipinas-Tourism title and pocketed a P500,000-management contract from BPCI, and products and services from the sponsors. She will serve as an ambassador of Philippine tourism.

When asked by ABS-CBN publishing head Ernie Lopez if a father could carry out the duties of a mother and vice versa, Manjon said: “God made us all equal. And if we are equally made, then we can do everything in God’s grace.”

The Albay lass took an unprecedented risk and rescinded the first runner-up spot she earned in last year’s pageant so she could join again this year, also giving up part of her prize package by doing so.

Necio will represent the country in the Miss International pageant, where the Philippines already won four times. She awaits a red carpet welcome on her return to Legazpi City, courtesy of Albay Gov. Joey Salceda.

She also took home a P500,000-management contract from BPCI, a trip for two to Japan to meet the organizers of the Miss International pageant, as well as other products and services from sponsors.

Tugonon was a campus queen at the University of Santo Tomas, where she was proclaimed 2010 Miss Thomasian Personality. Lastimosa, former Mutya ng Dabaw and Reyna ng Aliwan, was predicted by many to bag the Best in Swimsuit award with her excellent form.

The best in swimsuit award went to basketball varsity player Queenie Rehman, while Bulacan lass Luzelle Felipe took home the best in long gown trophy. Both were among the 15 semifinalists.

Sports science student Samantha Purvor was voted by her fellow candidates as Miss Friendship, while Angelia Ong was proclaimed “The Face of Binibining Pilipinas 2011” for garnering the most number of text votes.

There was a complete shutout of ABS-CBN wards in the pageant. The partner network’s artists failed to advance to the semifinals.