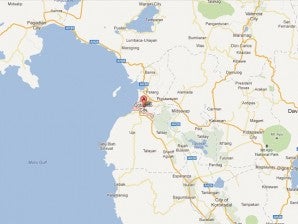 DAVAO CITY, Philippines—The election in South Cotabato’s top posts would come down to one issue—mining.

This, as candidates for the congressional and gubernatorial posts are either for or against the multibillion dollar Tampakan Copper & Gold Project of Xstrata-Sagittarius Mines Incorporated.

“Personally, I am not totally against mining as long as it follows what is required by law,” Rogelio said.

Rogelio will face reelectionist Representative Pedro Acharon Jr., who declared that he was not convinced that Xstrata-SMI project is safe for the environment and the people.

“The open-pit mine is around 500-hectare wide and about 800-meter deep. I doubt if the company could guarantee the safety of the environment and the people,” Acharon said.

Rogelio is supported by his brother, Manny, who recently changed his stand from being against to “pro-responsible” mining.

In the 2010 polls, Pacquiao earned the support of church people and pro-environment groups due to his opposition to mining and coal-fired power plant projects in the province.

“I’m no longer a dyed-in-the-wool anti-mining. My personal stand now is I am pro-responsible mining,” Pacquiao said in an interview with the Inquirer.

SMI holds a Financial and Technical Assistance Agreement (FTAA) over vast mineral deposits in the quadri-boundary of the provinces of South Cotabato, Sultan Kudarat, Sarangani and Davao Del Sur.

The mining firm is set to start full-blast operation in 2014 but this was derailed by the passage of South Cotabato environmental code, which banned open-pit mining anywhere in the province.

The company management believes a mere provincial environmental code cannot supersede the 1995 Philippine Mining Act, which is a national law.

But the line dividing those for and against mining is still not clear.

Pingoy, however, is backing up Rogelio Pacquiao’s congressional bid.

Pingoy had said that he was keeping an open mind when it comes to the issue of mining but, he claimed, as governor he is legally obliged to implement the provincial environment code.

Acharon admitted that a candidate’s stand on mining would be a major election issue here once campaign season kicks off next year.

The Catholic Church in South Cotabato has been reminding parishioners to junk the electoral bid of pro-mining candidates.

“Some of our mayoral bets in South Cotabato are noted pro-mining. I understand their position because of the benefits they are getting from mining,” Acharon said.