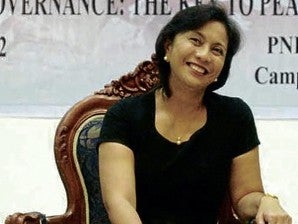 LENI ROBREDO: I am not sure that my decision is wrong or right, because I only used my gut feel for this. ROMY HOMILLADA

“I am not sure that my decision is wrong or right, because I only used my gut feel for this,” Robredo said, adding that she expected people to criticize her decision to join the electoral race despite earlier pronouncements that she was not interested in any elective position.

Robredo said she decided to run to fight the political dynasty in the province and to maintain unity among the political supporters of her late husband who was Naga City mayor for 19 years.

Jesse Robredo and two others died in a plane crash in waters off Masbate City on Aug. 18.

His widow will be up against Camarines Sur board member Charina Ante and Nelly Villafuerte, wife of last-termer and Jesse Robredo’s uncle, Rep. Luis Villafuerte, whose clan has been politically dominant in the province since the American period.

Robredo said her daughters Aika and Tricia cried and told her not to give in to the pressure when she told them of her unexpected decision to run.

“But I told them they can say that because they can’t see the importance (of my candidacy),” she said.

Robredo said she told her children that she had to balance personal interest with the interest of people who stood by her husband in the long years that he was mayor of Naga City.

Two other candidates for representative of Camarines Sur’s third district withdrew their COCs to give way to Robredo’s widow.

Naga City Vice Mayor Gabriel Bordado, who was earlier chosen by the Liberal Party as its nominee for representative over former Solicitor General Anselmo Joel Cadiz, withdrew his COC on Friday morning and asked Robredo to run instead, to preserve party unity in the province.

Cadiz, who had filed his COC on Wednesday as an independent candidate for the third district, also withdrew when Robredo decided to run for office, and was present when she filed her COC.

Robredo arrived at the Comelec office here on Friday at around 3:25 p.m. with daughter Jillian, Bordado, and other LP members.

Earlier that day, some 200 supporters of the late interior secretary marched to the Robredos’ home to prod his widow to run.

Robredo said she believed that it is not only by entering politics she can help preserve the legacy of her husband.

“I’m doing this in honor of my husband because it was important to him that I take care of the ‘group’ he founded,” she said, referring to the people who stood by the late interior secretary through his six terms as Naga City mayor.

She added that she is totally against political dynasties and in her fight against them, she will not turn her back on the people of Camarines Sur.

Butch Robredo, eldest brother to Jesse Robredo, said he pitied the Robredo daughters because they had expected a private life after their father’s death.

But he added that the family fully supported his sister in-law’s decision, and accepted it as “one continuing event” after Robredo’s death.

On Sept. 22, Leni was appointed chair of the Liberal Party in Camarines Sur, which was left vacant by the sudden death of the interior secretary.

Prior to this, the Judicial and Bar Council had short-listed Robredo for the position of Regional Trial Court judge in the Bicol Region.