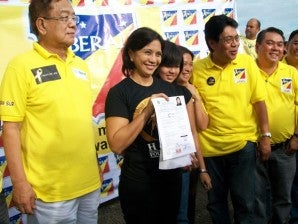 Leni Robredo with daughter Jillian shows off her certificate of candidacy. She is flanked by Liberal Party candidates in Naga City, from extreme left vice mayoral candidate Nelson Legacion, reelectionist mayor John Bongat and incumbent Vice Mayor Gabriel Bordado, who withdraw his LP endorsement for congressman and endorsed Leni in the morning of Oct. 5. DANNY AREUS/INQUIRER

MANILA, Philippines — Lawyer Maria Leonor “Leni” Robredo, widow of the late Interior Secretary Jesse Robredo, on Friday decided to run for a seat in Congress, according to television reports.

Robredo has decided to represent the third district of Camarines Sur under the Liberal Party, the same party of her late husband, and has filed her certificate of candidacy, according to television reports. Her youngest daughter, Jillian, was reported to have tagged along with her to the Comelec office, holding Robredo’s COC.

Other radio reports described Robredo to have arrived at the Comelec office with a throng of supporters clad in yellow. Earlier, Naga City vice mayor Gabby Bordado, who was supposed to run as congressman in the third district of Camarines Sur, decided to endorse Robredo instead, upon which employees of the city hall trooped to her home to urge her to run in the midterm elections.

She has been urged to compete with the wife of Camarines Sur Representative Luis Villafuerte Sr., Nelly, who will be running for governor after his third term as congressman. Another contender for the position of representative of the third district of Camarines Sur is former Solicitor General Anselmo Cadiz.

There has been a lot of talk of the administration party asking Robredo to run for the 2013 midterm elections but Speaker Feliciano Belmonte Jr. said that the widow of the former Department of Interior and Local Government chief showed interest in politics.

Robredo has recently been assigned as chief of the LP in Camarines Sur.