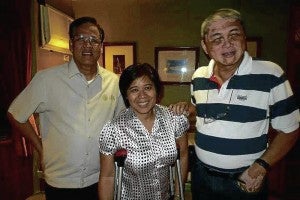 CITY OF SAN FERNANDO—President Aquino will be in this Pampanga capital Friday to endorse his party’s candidate for governor and whether or not it would be priest Eddie Panlilio is still anybody’s guess here.

What is certain, though, is that Mr. Aquino wants to end the rule of Gov. Baby Pineda, one of the closest friends of former President Gloria Macapagal-Arroyo and wife of alleged jueteng lord Bong Pineda.

Ferdinand Caylao, city administrator, said the Presidential Security Group had coordinated the President’s visit with city officials. Mr. Aquino is also inaugurating the building of the City College of San Fernando Pampanga (CCSFP) during his visit today, the last day of filing of certificates of candidacy for the 2013 elections.

Asked on Thursday if he would challenge Pineda in next year’s race, Panlilio said he still could not give a definitive answer because there are “last ditch efforts” to finalize the Liberal Party’s provincial slate. He declined to give details.

He won the 2007 race against Pineda but was unseated by the Commission on Elections after a recount of votes. He lost in their return bout in 2010.

Panlilio said he and Mr. Aquino talked in Malacañang on Sept. 28 over the state of affairs in Pampanga.

“The President wants to bring the daang matuwid (straight path) in the province,” said Panlilio. That meeting, he said, was arranged by LP leaders.

In those conversations, the last being in July, Panlilio said he turned down Robredo’s request and instead pushed the candidacy of Mayor Oscar Rodriguez, the LP provincial chair.

Panlilio, 58, laid down several conditions for his return. He said he would run for governor if nobody stood up to contest Pineda, if the laity clamored for it and if LP fields him.

“All these are unfolding,” he told Inquirer.

The risk of losing his priesthood is much bigger if he decides to seek public office again.

“I cannot accept that no Kapampangan will stand up and fight this system,” he said.

“I do not want history to show that this situation happened—when almost all members of a family are running, when couples, mother and child, and father and child are serving the government only to use their positions to cover up their inefficiency and wrongdoing,” he said.

Panlilio was referring to the Pineda family who, aside from the governor, is fielding her son, Dennis, as vice gubernatorial candidate. Dennis’ wife, Yolanda, is mayor of Sta. Rita town while his sister, Mylyn, is mayor of the Pinedas’ hometown of Lubao.

Panlilio said the governor’s husband, Bong, has called the shots in Pampanga politics. Bong Pineda had repeatedly denied his involvement in jueteng.

“Nobody wins if they are not supported by the Pinedas,” Panlilio said.

But Governor Pineda, a former board member and mayor of Lubao, said she has been practicing good governance through the proper use of public funds and by prioritizing health and social services in the province.

Earlier, she said she welcomed any challenger. “This is a democratic exercise. Father Panlilio has all the right to challenge the incumbent and present his case to the electorate of Pampanga because they are the ultimate judges,” Pineda said in a text message sent to the Inquirer by former Board Member Rosve Henson.