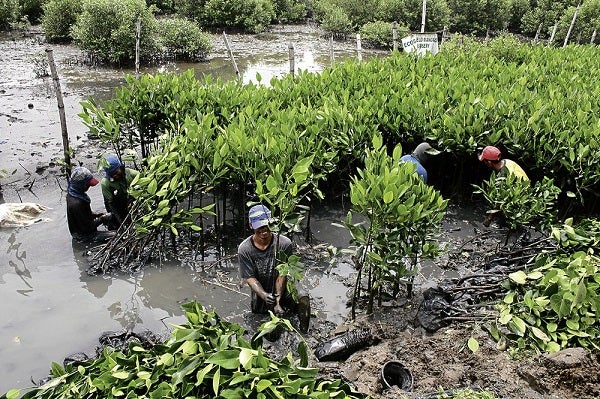 THE DESTRUCTION of mangroves continues in many areas, some being sacrificed for projects like this landfill under construction in Obando, Bulacan. TONETTE OREJAS / INQUIRER CENTRAL LUZON

Efrelyn Escultura-Calabano, special project officer of TK-Southern Tagalog, said the mangroves, some of which had been sawn into lumber and others being prepared for charcoal production, were cut from and found in Barangay Salinas, a coastal village facing Tayabas Bay.

“Based on our initial assessment, more than one hectare of mangrove area was destroyed. The entire haul needs at least two dump trucks to transport,” she said.

Quoting reports provided by a concerned citizen in the area, Escultura said a certain “George,” a resident of the village of Talim, was behind the mangrove destruction.

She said the illegal mangrove cutting is being investigated by the Quezon Provincial Agriculturist-Fisheries Division with help from by volunteer lawyers from TK.

Mangrove forests, also known as the “rainforest of the sea,” are an important part of the marine ecosystem as the roots of the trees provide shelter for marine life while their fallen leaves become feed for fish and other marine animals.

Cutting of mangrove trees is banned by Presidential Decree No. 705 or the Forestry Code of the Philippines and Republic Act No. 8550, otherwise known as the Philippine Fisheries Code.

The provincial government has been trying to stop forest and mangrove destruction in Quezon and led the massive planting of more than 2 million mangrove propagules in a single day in different coastal villages of the province last June 30.