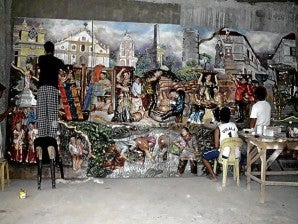 THE UNESCO heritage city of Vigan commissioned Kapampangan sculptor Wilfredo Layug to do this wood relief on the culture and history of the city. TONETTE T. OREJAS/INQUIRER Central Luzon

GUAGUA, Pampanga—A wooden relief mural on the culture, industries and history of Vigan, an Ilocos Sur city on the World Heritage List of the United Nations Educational, Scientific and Cultural Organization (Unesco), has been completed by artisans in an old woodcarving community here.

Sculpted by Wilfredo Layug and a team of eight, the Vigan mural was delivered to Ilocos Sur on Monday.

At least 3.8-meters tall and 6.8-meters wide, the mural is made of four panels. It was commissioned by the Vigan City government in February and took six months to finish.

“I was informed that this would be the centerpiece at the lobby of the city’s convention center. It would be shown to the public in time for a Unesco event on Nov. 8 and 9,” said Layug, who specializes in ecclesiastical and secular arts.

For the Vigan project, he combined various styles: The letras y figuras, estofado and embroidery.

In the first, human figures are assembled on letters. Estofado, which Layug learned from masters in Spain, leaves an impression of images wearing real clothes. Embroidery refers to detailed woodcarving, he said.

“I feel accomplished. The city gave me a free hand in the design,” he said.

He thanked Vigan City Mayor Eva Marie Medina for giving Kapampangan artists the opportunity to showcase the art of Betis, one of the two oldest towns in Pampanga until it was annexed to Guagua in 1903.

On its website, Unesco said: “Vigan is the best-preserved example of a planned Spanish colonial town in Asia. Its architecture reflects the coming together of cultural elements from elsewhere in the Philippines, from China and from Europe, resulting in a culture and townscape that have no parallel anywhere in East and Southeast Asia.”