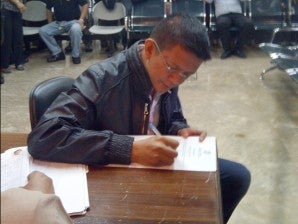 The magic of star power on Tuesday replaced the flamboyant atmosphere that marked the first day of the formal entry of aspirants in the Senate derby next year.

Sen. Francis “Chiz” Escudero was alone when he filed his certificate of candidacy (COC).

Gone were the brass bands and ati-atihan and dragon dancers that gave the Commission on Elections (Comelec) a carnival air on Monday as eight senatorial candidates of the United Nationalist Alliance (UNA) trooped there to file their COCs in the elections next May.

Clad in a leather jacket and tight jeans, Escudero—the reelectionist  guest candidate of the administration’s Liberal Party (LP) and UNA—gamely posed for photos for all and sundry who asked, including the Comelec staff processing COCs.

But he was also pounded by questions on why he did not come with celebrity Heart Evangelista, his rumored girlfriend. “She’s resting, I think,” he told a reporter.

Accompanied by her husband, Sen. Manny Villar, and her son, Mark, an incumbent Las Piñas representative, Cynthia Villar was the first LP candidate to file her COC in the Comelec.

“We were busy yesterday because of the proclamation rally so we thought this would be a good time,” said Villar, who will run on a platform focusing on the care of overseas Filipino workers and the protection of the environment, among others.

Actress Susan Roces also commanded a modest, star-struck crowd when she came Tuesday afternoon with her daughter Grace Poe-Llamanzares, chair of the Movie and Television Review and Classification Board. Grace filed her COC for senator.

Comelec employees took turns posing for photos with the actress while the others were content with just ogling her through the glass panels that divided the main hallway of the Palacio del Gobernador and the Comelec’s project management office, where the COCs were being filed.

The actress said the Comelec office brought back bittersweet memories of her late husband, actor Fernando Poe Jr., who ran and lost to Gloria Macapagal-Arroyo in the presidential race in 2004.

For her part, Llamanzares said she decided to join the senatorial race to be of service to the Filipino people through hard work and also to push for social welfare programs, particularly for children, that her father had wanted to pursue.

“President [Aquino] brought back the people’s trust in the government. This is what we’ve been fighting for in the last several years,” Llamanzares said.

Escudero and Llamanzares maintained that they would continue to enjoy UNA’s support despite having also accepted invitations as candidates of the LP, which has barred common candidates from joining UNA rallies.

Escudero said he had breakfast Tuesday with Vice President Jejomar Binay and they talked about the brewing tension between the LP and UNA over guest candidates. Another common candidate is reelectionist Sen. Loren Legarda.

“We talked about these issues and [we agreed] that this has to be resolved in the coming months,” Escudero said, adding that the two parties still have three months to address the apparent tug-of-war for the common candidates.

Escudero also said he was not keen on frequently joining rallies. “I still believe in the traditional and social media,” he noted.

Llamanzares also maintained that while she would join the rallies of the LP, she would still be supported by UNA as promised by its leaders—former President Joseph Estrada and Binay—her godfather and her father’s then campaign manager, respectively.

Llamanzares said Estrada and Binay had given her the freedom to do what she wanted in her campaign.

“I really don’t need to join UNA on stage but on a personal level, if there is an invitation from President Erap and Vice President Binay, I will be there,” she said.

On Monday, Binay said  UNA may have to withdraw its support for the so-called common candidates if they refused to appear in its campaign sorties while attending the rallies of the administration coalition.