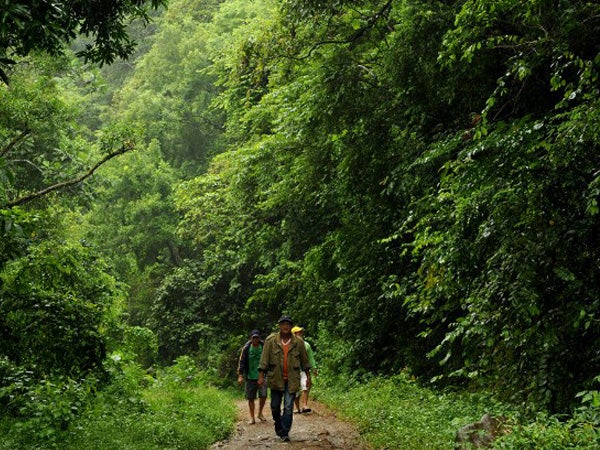 NORZAGARAY, Bulacan, Philippines—Father-of-five Alex Lesber patrols one of the Philippines’ most important forests carrying a cheap pistol and memories of a pastor being shot dead in front of him.

Lesber is one of just 2,000 poorly paid rangers trying to stop what the government admits is “rampant” illegal logging across the country, and their time roaming amid the vanishing forests is becoming increasingly dangerous.

Twenty of his colleagues have been murdered since the government imposed a nationwide logging ban in 2010, according to the environment ministry, a move that prompted already shady timber merchants to adopt more aggressive tactics.

“There is always that possibility that one of us could get hurt where we work. We arrest people, so naturally they hate us,” Lesber, 49, told AFP while patrolling Angat forest, one of the main watersheds for Manila’s dams.

The stakes are high for the Philippines, a tropical Southeast Asian nation of more than 7,000 islands that has lost more than half its forest cover over the past century.

There are only 7.6 million hectares (18.78 million acres) left to be guarded by men like Lesber.

But the Philippines’ forest rangers are under-funded, out-numbered and extremely vulnerable, according to Environment Secretary Ramon Paje.

“Fighting illegal logging should be considered a military operation, rather than a regulatory one. We want the army at the forefront, rather than our rangers,” he told reporters recently.

One of the problems for the rangers is that corrupt government officials are often involved in the timber industry, according to environment activists.

This is part of a broader scourge across the Philippines of underpaid local officials or security forces being enticed into lucrative but illegal businesses.

President Benigno Aquino III has said repeatedly that corruption within government and society in general is the country’s biggest problem.

Paje said at least eight city mayors around the Philippines were under investigation for allegedly protecting illegal loggers. 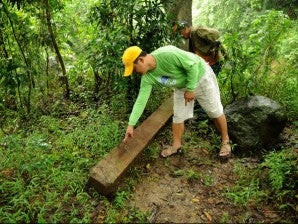 This AFP file photo shows forest ranger Erik Vetudes checking a confiscated log at the Ipo Dam watershed at Norzagaray, Bulacan, three hours north of Manila. He is one of the eight rangers trying to protect 21,000 hectares of forests that serve as the watershed for nearly all of the tap water of the Philippine capital and nearby areas, home to 15 million people. AFP PHOTO / NOEL CELIS

“They will not hesitate to kill me”

From a tiny and sparse concrete building base in Norzagaray town, three hours’ drive north of Manila, Lesber and the other Angat rangers drive a beat-up pickup truck into the forests for patrols that last up to a week.

There are just eight rangers trying to protect 21,000 hectares of forests that serve as the watershed for nearly all of the tap water of the Philippine capital and nearby areas, home to 15 million people.

Aside from logging, the rangers have to contend with what they say are the even more ominous forces of slash-and-burn farmers.

Lesber said the rangers regularly received death threats as well as bribe offers, although he insisted they did not take any despite each earning just 11,000 pesos ($260) a month.

Lesber said the rangers carefully picked their battles to avoid the most dangerous situations, typically avoiding slash-and-burn farmers because they were desperate people known to fight to protect their livelihoods.

“Unless they cause extensive damage, we let them be. I know they will not hesitate to kill me if I apply the law to the letter,” he said.

But with these tactics, Lesber said the rangers had watched helplessly as thousands of migrants settled in the watershed, clearing swathes of valuable forest for farms, in recent years.

Arrests of illegal loggers are also rare, with the rangers instead preferring to confiscate timber left on the ground and perform monitoring duties.

Lesber, who wears a military-style jacket, jeans and rubber shoes to work, said he carried his own pistol while on patrol but that it was not enough.

“I wish the government would give us guns. That would lessen the odds stacked against us,” Lesber said.

The most terrifying moment for Lesber came in 2003 when he and other rangers watched three gunmen suspected to be working for illegal loggers drag a preacher out of his chapel, then stabbed and shot him dead on the street.

He said the preacher had just tipped off the rangers about illegal logging in the area.

No-one was arrested for the murder even though a group of soldiers also witnessed the killing, according to Lesber and the environment ministry.

But that is not unusual in the Philippines.

Rights groups say the country has a brutal “culture of impunity”, in which politicians, business figures and other powerful interests feel free to murder anyone standing in their way, comfortable knowing they will not get caught.

No-one has been charged in relation to 19 of the 20 rangers murdered over the past three years, according to the environment ministry’s spokeswoman, Marissa Cruz.

In the 20th murder—of a female ranger who was shot in her office—only the gunman was charged while the masterminds remained free, she said.

Non-government watchdog Kalikasan (Nature) has documented another 54 killings of environmental activists since 2001, with 18 murders since President Aquino came to office in 2010. Its tally does not include the rangers.

Most victims were working to expose illegal mining, according to Clemente Bautista, national coordinator for the group.

He said a mining security guard was the lone person to have been charged for any of the 54 killings, with local government officials or police involved in the mining activities typically ensuring the murders remained unsolved.

“The government is not doing anything to hold the perpetrators accountable,” Bautista said.

“But we must not let ourselves get intimidated. It’s the only way to expose what is happening.”