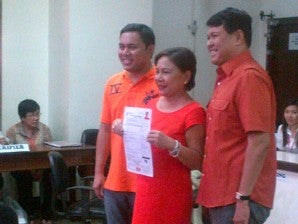 MANILA, Philippines—Las Piñas Rep. Cynthia Villar has filed her certificate of candidacy at the Commission on Elections (Comelec) main office in Intramuros Tuesday.

Villar arrived with her husband, outgoing Senator Manuel Villar, and her son Congressman Mark Villar at around 11: 15 am.

Villar had been earlier announced as part of the ruling administration’s slate.

Villar, in an interview with reporters, denied allegations the Villar family is among those building political dynasties, saying that her husband would be out of the senate by 2013 and that Las Piñas had always been their district for 21 years.

Villar, when asked about her relations with former Senator “Jamby” Madrigal, said she had made peace with the former senator.

“We have moved on…Hindi na tayo dapat magdwell sa past kasi hindi tayo magiging successful (We shouldn’t dwell on the past otherwise we won’t be successful),” Villar said.

Madrigal had been reported to have repeatedly bashed the Villars during the May 2010 presidential elections campaign period.

Villar said she had a talk with Madrigal Monday. Madrigal had also been included in the administration ticket.

“We have always been friends…it just so happened that we were political opponents in 2010,” Villar said.

Villar noted that her programs would center on caring for Overseas Filipino Workers (OFWs), improving the environment, agriculture, infrastructure, health and education.

“I’m not worried… I’m prepared for the job,” Villar said.

Manny Villar also expressed his support for his wife saying that her credentials as congresswoman for nine years made her ready for the senatorial post.

Villar said his wife had her own advocies that she would pursue if she becomes senator.

Asked by a reporter about reports of the Villars engaging in premature campaigning because of their recent ads, both the Villars dismissed the allegations saying that it was important for the people to know “what they have done for the past years.”