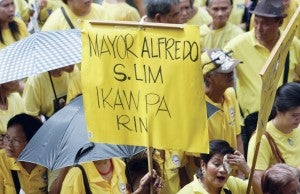 Supporters of incumbent Manila Mayor Alfredo Lim make their sentiment known through a message on a placard as he files his certificate of candidacy in the Commission on Elections. Lim faces his toughest rival yet for the city’s top post—former President Joseph Estrada. NIÑO JESUS ORBETA

A 67-year-old businessman who claimed he was cheated of victory when he ran for Quezon City mayor in 2007 was the first to file his certificate of candidacy (COC) for the same post in the Commission on Elections (Comelec) on Monday.

Tita Garcia, an official of the Comelec office in the city’s first district, told the Inquirer that Romeo Sanchez Acebedo, a bachelor who is a resident of Anahaw Street in Veteran’s Village, Quezon City, filed his COC at 9 a.m. as an independent candidate.

As he did so, Acebedo told her that he was cheated in the 2007 polls when he ran against then incumbent Mayor Feliciano “Sonny” Belmonte.

Garcia said that when she asked him what he did for a living, Acebedo jokingly told her that he was in the “5-6” money-lending business (Filipino slang for loans that come with higher-than-usual interest rates).

“He said … that he has not been able to collect any of the money he lent out,” she added.

In Manila, Mayor Alfredo Lim, who is running for reelection, talked at length on Monday about the planned $4-billion financial center he wants to leave as his legacy to the city.

After a Mass held at the Bulwagan Gat Antonio J. Villegas in City Hall and before he filed his COC in the Comelec office, Lim told his supporters that the center, which would rise on a 96-hectare reclaimed area, would surpass that of Makati City.

According to him, 90 hectares would be used for the Global Financial Hub under the Manila Bay South Harbor Expanded Port Zone Project while the rest would become the site of 30-story condominiums where slum dwellers in Baseco would be relocated.

“I don’t talk a lot, I just work and when everything is in place, that’s when I tell you about it,” Lim told his supporters and other local candidates.

The financial center project, which will take about five years to complete, is expected to begin construction in November, Lim said. It will generate 150,000 jobs and an additional two million tourists per year. A 101-story building—the tallest in the country—is included in the plan.

After unveiling his plan, Lim—who was referred to by his supporters as a real Manilan, a swipe at his toughest rival for the post, former President Joseph Estrada—then walked to the Comelec office on Arroceros Street together with his running mate, Councilor Lou Veloso, and their supporters.

Meanwhile, the fairer sex will take center stage in the race for Taguig City’s top post.

To be pitted against each other are the daughter of a former Supreme Court associate justice and the incumbent city mayor, who is married to a senator.

Rebecca Carissa Tiñga, 30, a former councilor who is the youngest child of former Associate Justice Dante Tiñga and sister of former Taguig Mayor and now Representative Freddie Tiñga, was among the early birds at the local Comelec office.

With the filing of her COC, Rebecca formalized her intention to run next year against incumbent Mayor Lani Cayetano, who beat her father in the 2010 elections.

The electoral protest he filed against Cayetano is still pending in the Comelec.

Rebecca will be running alongside Paolo Papa, the son of former Taguig Mayor Ricardo Papa, whose family used to be embroiled in a political rivalry with the Tiñgas.

Cayetano, on the other hand, has yet to file her COC but her staffers said she intends to do so either on Thursday or Friday.

“The good thing is I’m the only Tinga running,” Rebecca said, an apparent swipe at the Cayetanos, three of whom are holding elective positions—Lani, her husband Sen. Alan Peter Cayetano and her sister-in-law Sen. Pia Cayetano.

Rebecca said that her brother, Freddie Tiñga, had dropped his plan to seek reelection for personal reasons.

In Pasay City, incumbent Mayor Antonino Calixto filed his COC at 9 a.m. as a drum-and-bugle band played and his supporters, who were clad in green shirts, shouted encouragement.

Immediately after, former Pasay Mayor Peewee Trinidad, who is seeking a comeback, arrived at the Comelec office to signify his intention to run against Calixto.

Things, on the other hand, remained quiet at the Makati Comelec office, election officer Allan Sindo told the Inquirer.

So far, no one has declared intention to run against Binay.

Meanwhile, Caloocan Mayor Enrico Echiverri took advantage of the change of command ceremony at the Caloocan Police Headquarters on Monday to make a pitch for his son whom he has picked to succeed him.

“I think I can say that on my last term and my last year, I think the best legacy I can leave the City of Caloocan is RJ [Echiverri],” he said, referring to his son, Councilor and Liga ng mga Barangay sa Pilipinas President Ricojudge “RJ” Echiverri.

The audience was silent for a moment before it took the hint and then burst into applause.

“Thank you for your applause, it’s all up to you now,” the mayor said.—With Erika Sauler, Niña Calleja and Nathaniel R. Melican