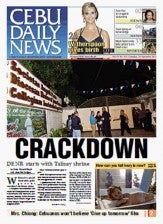 Without a court warrant, gate guards wouldn’t let them enter.

A surprise visit yesterday was made by the Department of Environment and Natural Resources (DENR) to the shrine in Talisay City where Msgr. Cris Garcia keeps a large collection of religious icons.

Only two representatives were later allowed to enter to talk with the acting rector, Fr. Marco.

A spokesman said they wanted to set a preliminary meeting although they already knew Garcia was on sick leave in Manila seeking medical treatment.

They gave a letter addressed to Msgr. Garcia but the shrine’s custodian of the Society of the Angel of Peace (SAP), declined to receive it.

The unscheduled visit signalled the start of a crackdown on ivory pieces in the possession of the monsignor, after the National Geographic magazine’s October cover story “Ivory Worship” named the Cebu priest as one of the country’s best known ivory collectors.

The article linked an increased trend of elephant poaching in Africa to the illegal ivory trade driven by a global demand for religious icons, Catholic and Buddhist, in many countries, including the Philippines.

With Cebu the first target of a DENR inquiry, questions remain about how authorities would be able to determine whether ivory pieces were “new” or obtained after 1981 when the Philipines signed an international convention that bans ivory trafficking. (See separate story)

Raw ivory tusks are easy to identify as contraband but carved pieces of ivory don’t clearly show their age or origin.

Eddie Llamedo said the DENR-PAWB team will be writing to other establishments which possess ivory products.

“Our investigation is aimed at identifying the shops and other outlets which have possible possession of ivory,” he said.

Llamedo denied reports that the DENR-7 will be securing a seach warrant.

“We want to handle things in a diplomatic manner. Securing a search warrant is tedious because we first have to prove possession of ivories,” he said.

In a Wednesday press conference, Cebu Archbishop Jose Palma said the religious icons in Msgr. Garcia’s extensive collection were “private property” and mostly antiques belonging to his family, a well to do clan in Cebu who are major stockholders of the Visayan Electric Company.

He said the archdiocese would cooperate with any legal investigation but that due process must be followed.

(In last night’s visit, lawyer Jesus Anthony Garcia was seen arriving at the Talisay shrine about 7 p.m. after the DENR team had left.)

The church compound in Cansohong Talisay is an Archdicoesan shrine.

Environment officials from Manila arrived yesterday and met with counterparts in the National Bureau of Investigation (NBI) to map out how to start their investigation of contraband ivory.

“We are in close coordination likewise with the National Museum. This will help us since there may be things that are not covered under the existing law on wildlife protection which might be covered by their mandate of the law,” Adobo said.

He said PAWB had a specific function to enforce the Convention on International Trade in Endangered Species of Wild Fauna and Flora (CITES) which declared a global ivory trade ban in 1990.

“Under the covenant, the Philippines has a management authority. This function was mandated to PAWB. This does not mean we are taking over, that the people in the regional office cannot do these things. They can do it. It’s just that the CITES management authority of the Philippines is lodged with PAWB. They are coming as a personality different from DENR,” Adobo explained.

Adobo said the DENR was already planning how to investigate ivory smuggling when the controversy broke over the National Geographic article.

“The Philippines was already named one of the few Southeast Asian nations that are believed to be the destination of this illegal product and by-product, the final destination and transport point,” said Adobo.

Other countries include Malaysia and Vietnam, he added.

“When we arrived from the convention, I asked for a meeting with member agencies of the NALEC (National Law Enforcement Council), and we were caught flat-footed. We were formulating our course of action when the National Geographic magainze article broke. So we knew ahead,” he said.

Adobo said they are coordinating with the Cebu Archdiocese but have not spoken yet with the monsignor.