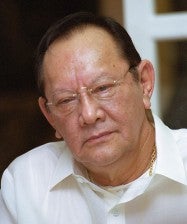 In April last year, the high court ruled that another 20 percent of sequestered SMC shares belonged to Eduardo Danding Cojuangco Jr., uncle of President Aquino, in a decision described by a dissenting justice as “the joke of the century.” INQUIRER FILE PHOTO

Coconut farmers on Thursday hailed the Supreme Court decision affirming with finality the 2004 Sandiganbayan ruling that awarded to the government the 24-percent block of sequestered shares in San Miguel Corp. (SMC) acquired with the funds from the coconut levy imposed during the martial law years.

The ruling threw out the motion for reconsideration of the Coconut Producers Federation          (Cocofed) of the high court’s decision in January awarding the 700 million SMC preferred shares of stock worth P52.5 billion at P75 per share to the government to be used for the benefit of the coconut farmers.

“We have reason to rejoice. The Supreme Court decision is a big blow to the anticoconut farmers clique. The decision rebuffed the Cocofed’s scheme to get a cut of the coconut levy that truly belongs to the farmers,” Jansept Geronimo, secretary of the Coalition of Coconut Farmers of Quezon, said in a phone interview.

“The amount involved can spell a great difference for the more than 3 million poor farmers across the country,” he said.

Geronimo called on administration officials to convene immediately the Presidential Task Force on Coco Levy and meet the coconut farmers in a dialogue to discuss how the fund would help the farmers.

“That’s their promise when they met us in Mendiola last week. That they will engage us in a dialogue. We will hold them to their promise because of the urgency of the situation,” Geronimo said.

Last week, some 3,000 coconut farmers from Quezon province, including children, joined thousands of anti-Marcos activists on Mendiola outside Malacañang in remembering the dark days of the dictatorship.

“That it is unanimous gives us comfort that it will no longer be reversed and that it will become final some time soon. That said, we will recommend to the President that he certify as urgent the appropriate legislative measure that would protect these funds and benefit the coconut industry and all the coconut farmers,” Gonzaga said.

Marco Sardillo III, volunteer lawyer for a coalition of a dozen coconut farmers, said the administration should move swiftly to safeguard the funds meant to benefit some 20 million Filipinos, regarded as among the nation’s “poorest of the poor,” who are dependent on the coconut industry.

“Congress should fast track the passage of a law that would see to it that the funds are utilized in a transparent, accountable, and sustainable manner, beyond the Aquino administration,” he said.

“It might take a generation to rehabilitate the coconut industry, whose growth and development has been retarded by the lukewarm support it has received all these years,” he added.

In a nine-page resolution dated Sept. 4 and issued Thursday, the court dismissed the appeal of Cocofed and eight other individuals for lack of merit.

Cocofed is claiming the SMC shares on behalf of 1 million unnamed coconut farmers.

“The instant motion is but a mere reiteration of rehash arguments that have already been previously pleaded, discussed and resolved by this Court in its Jan. 24, 2012, decision. And considering that the motion’s arguments are unsubstantial to warrant a reconsideration or at least a modification, this Court finds no reason to modify or let alone reverse the challenge decision,” stated the resolution penned by Justice Presbitero Velasco Jr.

Ten other justices concurred while three —Antonio Carpio, Teresita Leonardo-De Castro and Diosdado Peralta—inhibited themselves from the ruling.

The high court said it would no longer entertain any further pleading on the matter.

The shares, registered in the name of the Coconut Industry Investment Fund  and its holding companies, were sequestered after the 1986 Edsa People Power Revolution. The government said the shares were part of the alleged ill-gotten wealth of the Marcos dictatorship administered by his crony, Eduardo Danding Cojuangco Jr.

In April last year, the high court ruled that another 20 percent of sequestered SMC shares belonged to Cojuangco, uncle of President Aquino, in a decision described by a dissenting justice as “the joke of the century.”

Farmers are still intent on recovering Cojuangco’s 494.8 million SMC shares worth P58 billion, although the court ruling has become final and executory.