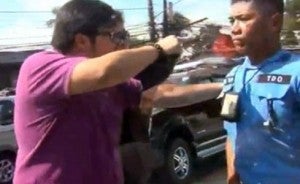 MANILA, Philippines—Direct assault raps were filed against Robert Blair Carabuena on Thursday with a Quezon City court for slapping a traffic enforcer of the Metro Manila Development Authority in August, which was caught on camera and went viral on the Internet.

The charge was filed on the recommendation of Assistant City Prosecutor Victorino Badua Jr., who found probable cause to indict the suspended Philip Morris Fortune Tobacco official in court.

The case against Carabuena was formally filed on Thursday with the Quezon City Metropolitan Trial Court.

In a two-page resolution, Badua said all the elements of the crime appeared to exist in the case.

“Respondent Robert Blair, without valid or justifiable cause, assaulted the complainant by striking his head using his own hat and slapping him on his face. Second, complainant, who is a traffic constable, is an agent of a person in authority and when he was assaulted, he was in the performance of his official duty,” Badua said.

A bail of P12,000 was recommended for Carabuena’s provisional liberty.

The charge stemmed from the complaint of traffic enforcer Saturnino Fabros, who said that Carabuena assaulted him on August 11 at about 3:30 p.m. while he was directing traffic on Capitol Hills Drive and Tandang Sora Avenue.

Carabuena was then driving a green Volvo sedan (XCF-871) from Tandang Sora Avenue.

Fabros claimed that when he approached the vehicle, Carabuena and his brother alighted, allegedly challenging him to a fight.

The motorist also allegedly removed Fabros’ hat, smacking it against the man’s head, and even slapping the man in the face.

Carabuena’s father, according to the traffic enforcer, alighted from the car and apologized to him.

A crew of TV5’s T3 program happened to pass by and was able to record the incident on video. The footage eventually went viral on the Internet.

Carabuena’s lawyer appeared during the preliminary investigation but his client failed to submit a counter-affidavit to the charges.