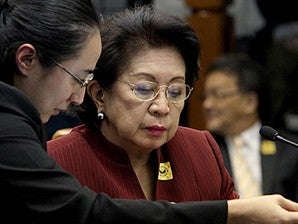 Ombudsman Conchita Carpio Morales has relaxed the rules on public access to the statements of assets, liabilities and net worth (SALN) of government officials on file in the Office of the Ombudsman (OMB).

Assistant Ombudsman Asryman Rafanan, office spokesperson and chairman of the Ombudsman’s Committee on Internal Rules and Regulations, said that under Memorandum Circular No. 03—dated Sept. 11,  2012,  but which shall take effect on Oct. 15, 2012—the rule now is that “everything is open unless restricted” as opposed to what it was before, “everything is secret unless allowed.”

The new set of SALN guidelines was announced and explained on the radio program “Ombudsman Ngayon” over dzRB last week.

Assistant Ombudsman Evelyn Baliton said that unlike the old rules that listed only three reasons for the granting of a SALN request, namely, for a press report, student research or a court order, the new rules provide that all requests for SALNs shall be granted, subject only to exceptions provided for under the law or jurisprudence, or the following reasons:

The new rules also list the different Ombudsman offices where a person could ask for copies of SALNs of listed public officials and employees, as differentiated from those that may be obtained from, say, the Civil Service Commission or the Clerk of Court of the Supreme Court as official repositories of other SALNs.

In treating the SALN request form as a public record, the new guidelines allow the requester to ask for anonymity unless the official or employee complained about can cite a specific violation or encroachment on his or her rights and that his or her letter-request to obtain a copy of the particular SALN request form was for purposes of availing himself or herself of legal remedies.

The new guidelines also have a provision that says a requester may directly report to the Ombudsman’s fact finding office and initiate a lifestyle check of a public official or employee even where their SALN cannot be secured for any reason, as long as the requester has reason to believe the personnel’s assets and properties are unreasonably disproportionate to their income.

Rafanan said the new rules ensure the widest possible public access to SALNs that are in the custody of the Ombudsman.

“All the requester needs to do is to subscribe to the SALN Request Form (downloadable from the website), present the required identification cards and pay minimal reproduction and certification fees,” he said.

Under the new guidelines, a requester must present at least two original IDs, one of them government-issued and bearing his picture and signature. A member of the press, aside from a regular ID card, should also present an official press ID with proof of affiliation or accreditation as a legitimate reporter. In the case of students, a current school ID with an endorsement from school authorities will do.