No need for Aquino to explain Gadapan’s removal – senators 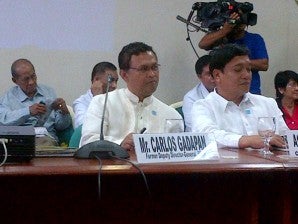 “The President doesn’t have to say anything to prove loss of confidence,” Senator Miriam Defensor Santiago told reporters after attending the hearing of the Senate committee on public order and dangerous drugs.

During the hearing, Gadapan lamented he was removed “without due process” and without being told the reason why he was being fired.

But Santiago told Gadapan that as a presidential appointee, he was serving at the pleasure of the President.

“Due process does not apply in this case,” because he can be removed anytime by the President, she said. “You just get kicked out … there is no hearing.”

Senator Gregorio Honasan, chairman of the committee, agreed with Santiago, saying Gadapan’s removal from office was the  prerogative of the President.

It was not also right that Gadapan, he said, went to the media complaining about his removal and accusing PDEA director general Jose Gutierrez’s wife of excessive gambling.

He said Gadapan was free to raise the issue in the proper courts, and not in the media.

Senator Vicente Sotto III said he was not satisfied with Gadapan’s answers during the hearing.

“He appears to be feeling around with his answers to Santiago’s questions. It’s not very clear [and] disappointing to a certain extent,” Sotto said in a separate interview.

“Technically it’s in the prerogative of the President if he wants to replace you,” Sotto added. “He should have just raised it with the Grievance Committee.”

Santiago also believed that the gambling habits of Gutierrez’s wife should not have been dragged into the issue since it was not a matter of national interest.

Gadapan claimed that Gutierrez’s wife was using PDEA funds but Santiago challenged him to show proof and even said that it was he who was caught on camera gambling in one of Metro Manila’s casinos.

But the former PDEA official claimed he was in the casino to establish his network and to investigate money laundering.  Santiago doubted his story and disclosed that he had been removed from his previous job in a bank due to “habitual gambling, which the latter did not deny.