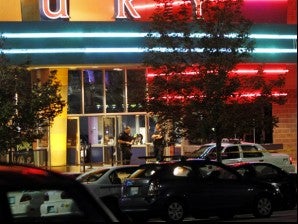 LOS ANGELES — Injured victims of a deadly US shooting at a screening of the latest Batman movie sued the theater operators Friday for alleged negligence over security, local media reported.

Two lawsuits filed in Denver claimed there were no guards on duty for the midnight showing of “The Dark Knight Rises” at the Century Aurora 16 in Aurora, Colorado on July 20, when 12 people were killed.

In addition, the doors allegedly used by the gunman had no alarms, and staff did not monitor the parking lot behind the theater, where the shooter is believed to have prepared for the attack, according to The Denver Post.

“Any person who wished to make a surreptitious and unauthorized entry into the theater could easily determine that the lack of security personnel and lack of any alarm on the door… would allow them to leave the theater, and re-enter without fear of being discovered,” said one lawsuit cited by the Post.

The alleged gunman, 24-year-old James Holmes, was dressed in full body armor and a gas mask when he burst into the midnight screening, throwing two tear gas-like devices to blind people before opening fire indiscriminately.

The legal action, taken against the theater’s parent company Cinemark USA, was filed by Joshua Nowlan, Denise Traynom and Brandon Axelrod, who were injured in the shootings, according to the Post’s report.

Holmes, who showed up in court with bright orange hair and seemed bewildered by the proceedings, is being held in solitary confinement at Arapahoe County Detention Center.

He could face the death penalty if convicted, although Colorado has only executed one person since the United States reinstated capital punishment in 1976.