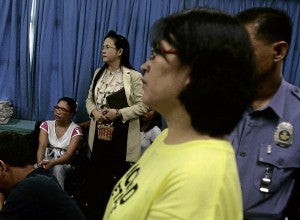 BONITA Baran (left, seated) listens impassively as her former employer, Ana Liza Marzan, pleads not guilty in court to charges that she maltreated the former. Baran has accused Marzan of subjecting her to repeated abuse until she lost her eyesight. MARIANNE BERMUDEZ

The woman who allegedly maltreated her housemaid pleaded not guilty Thursday to seven counts of serious physical injuries and two counts of attempted homicide.

Ana Liza Marzan, who together with her husband Reynold is accused of subjecting Bonita Baran to abuse until she lost her eyesight, was arraigned before Judge Julieto Fabrero of the Quezon City Metropolitan Trial Court Branch 40.

Public Attorney’s Office chief Persida Rueda-Acosta, who helped the victim file the cases against her former employers, said she would push for Baran’s inclusion in the Witness Protection Program.

On Monday, the couple pleaded not guilty to the charge of serious illegal detention in the sala of Judge Germano Francisco Legaspi of the Quezon City Regional Trial Court Branch 77.

Baran claimed that Ana Liza beat her up repeatedly until she went blind and burned her face with a flat iron. She also said the couple locked her up inside their house and refused to let her leave. Julie M. Aurelio