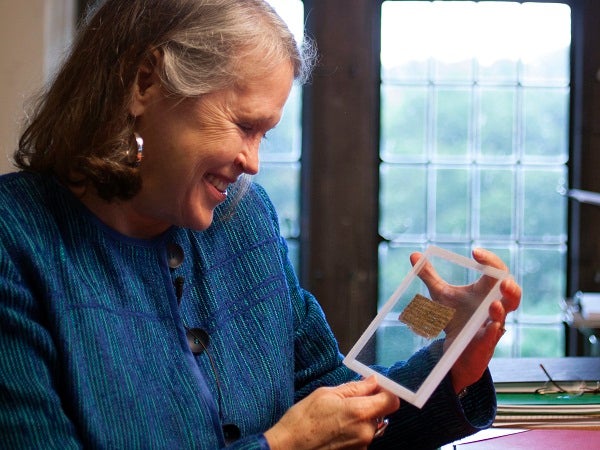 In this Sept. 5, 2012 photo released by Harvard University, divinity professor Karen L. King holds a fourth century fragment of papyrus that she says is the only existing ancient text that quotes Jesus explicitly referring to having a wife. King, an expert in the history of Christianity, says the text contains a dialogue in which Jesus refers to “my wife,” whom he identified as Mary. King says the fragment of Coptic script is a copy of a gospel, probably written in Greek in the second century. AP/Harvard University, Rose Lincoln

VATICAN CITY—A US professor has caused a sensation in Rome where she spoke about an ancient papyrus fragment that refers to the “wife” of Jesus, but the theory that Christ could have been married is seen with great skepticism in the Vatican and by historians.

Professor Karen King, who teaches at Harvard Divinity School, spoke about the existence of an ancient Coptic Christian scroll from the fourth century measuring 3.8 centimeters by 7.6 centimeters which contains the words: “Jesus said to them, my wife.”

During a congress on Coptic studies she put forward the theory that some early Christians believed Jesus was married.

She added that this “doesn’t prove that Jesus was married” but hinted that the question was being raised at the time, even though Christian tradition assumed as a fact that Jesus was not married.

“From the very beginning, Christians disagreed about whether it was better not to marry, but it was over a century after Jesus’ death before they began appealing to Jesus’ marital status to support their positions,” she added.

The professor also cautioned that the authenticity of the document still had to be verified with tests on the ink.

Contacted by AFP, Vatican spokesman Federico Lombardi refused to call into question King’s competence as a historian but said that “we do not really know where this little scrap of parchment came from.”

“This does not change anything in the position of the Church which rests on an enormous tradition, which is very clear and unanimous” that Jesus Christ was not married, he said.

“This changes nothing in the portrayal of Christ and the gospels. This is not an event that has any influence on Catholic doctrine,” he said.

A professor at the Protestant Faculty of Theology in Paris, Jacques-Noel Peres, pointed out the text was from a relatively late period.

“I have never read texts from any preceding period which spoke about the veracity of Jesus being married,” Peres said.

The professor added that in the language of the time “wife does not necessarily mean spouse.”

He quoted the famous phrase from the Bible in which Jesus spoke to his mother at the marriage at Cana saying: “Woman, why turn to me?” underlining that the reference could come from this passage.

Some historians said the script could come from Gnosticism — a doctrine that was popular in the second century — which was very marginal and in disagreement with the Church and whose texts were exaggerated.

The editor of the Vatican’s official daily Osservatore Romano, Professor Giovanni Maria Vian, a specialist in the history of the early Church, said he doubted the authenticity of the fragment which could be a fake sold as a genuine article to get a higher price since “the theme raises popular interest.”

“There is a business in fakes in the Middle East,” Vian said, adding that in the United States there had been “an attempt to create a buzz around this case.”

Citing expert observations, he said that the writing on the papyrus is “personal writing” whereas a Codex would have been written in a “very rigid” way resembling a printed text.

“Church tradition has no mention of a wife of Jesus. All the historical indications are that Jesus was unmarried. It is clearly said that Saint Peter was married. So why hide this for Jesus?” Vian said.

Vian said that if the text were indeed from that period it could be a fragment from an apocryphal gospel inspired by gnosticism translated into the Coptic language.

The apocryphal gospels, which were presented as coming from the entourage of Jesus Christ, flourished in the early centuries of Christianity.