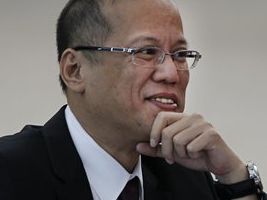 President Benigno Aquino’s approval and trust ratings improved by double digits across almost all areas and classes, according to an Aug. 31-Sept. 7 survey by Pulse Asia.

According to Pulse Asia, Mr. Aquino registered an approval rating of 78 percent in September, up by 11 percentage points from 67 percent in the previous quarter.

His trust rating also stood at 78 percent, an increase of 13 points from 65 percent last May.

The President’s most recent approval and trust ratings “nearly approximate his very first presidential ratings recorded back in October 2010 which are at 79 percent and 80 percent, respectively,” Pulse Asia said in a press statement.

Mr. Aquino made double-digit gains in approval ratings in Metro Manila (from 57 percent in May to 75 percent in September), the Visayas (from 69 percent to 80 percent), and Mindanao (from 66 percent to 79 percent).

Disapproval of his performance eased in Metro Manila by 7 points, from 12 percent in May to 5 percent this September.

Mr. Aquino’s trust rating in Metro Manila went up 12 points, from 59 percent to 71 percent, while his distrust rating declined 10 percentage points from, 14 percent to 4 percent.

The President got single-digit disapproval and distrust ratings across all geographic areas and classes.

Among socioeconomic classes, the poorest Class E gave the President the highest approval and trust ratings of 83 percent and 86 percent, respectively.

Respondents were asked to express approval, disapproval or indecision on the President’s performance on 12 selected national concerns.

The approval ratings of the administration for the other remaining issues were: 50 percent for environmental protection, 50 percent for strengthening people’s trust in the government and its officials, 48 percent for defending the country’s territorial integrity, and 42 percent forpopulation growth control.

At the time of the survey, news dominating the headlines included the death of Interior Secretary Jesse Robredo in a plane crash last Aug. 18 and Palace confirmation that Robredo was investigating several sensitive government matters before his death; the appointment of Associate Justice Maria Lourdes Sereno as the 24th Chief Justice of the Supreme Court; the appointments of Transportation Secretary Manuel Roxas II as the new interior secretary and of Cavite Rep. Joseph Abaya as Roxas’ replacement in the DOTC.

Ongoing discussions on the reproductive health bill; the continuing tensions between the Philippines and China over territories in the West Philippine Sea; the investigation ofthe alleged kidnapping of Rolito Go at the New Bilibid Prison; and public concern over the escape of former Palawan governor Joel Reyes and his brother, Coron Mayor Mario Reyes.