US to Chinese troops: ‘Trust us’ 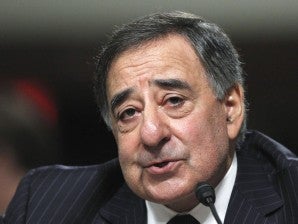 BEIJING—US Defense Secretary Leon Panetta told Chinese troops on Wednesday that America’s new military focus on the Asia-Pacific region, including plans to put a second radar system in Japan, is not an attempt to contain or threaten China.

Delivering his message directly to the young Chinese officers and cadets coming up through the ranks, Panetta tried to put to rest fears that the US move to add forces, ships and a missile defense system in the region is aimed at the communist giant.

Ever since the plan was unveiled by the Pentagon earlier this year, the US military’s shift to the Pacific has fueled worries of increased tensions or conflict with China and its 2.3-million-member People’s Liberation Army (PLA).

While the broad sentiments expressed in the speech were not new, Panetta laid out a more pointed argument that the growing American presence in the region includes an effort to build a stronger relationship with Beijing.

“Our rebalance to the Asia-Pacific region is not an attempt to contain China. It is an attempt to engage China and expand its role in the Pacific,” Panetta said in a speech at the Engineering Academy of PLA Armored Forces.

“It is about creating a new model in the relationship of two Pacific powers,” he added.

He acknowledged that improving relations and building trust will take time and that, “despite the distance, the distance that we have traveled over the past 40 years, it is clear that this journey is not yet complete, particularly for our two militaries.”

Tensions between the United States and China have reverberated across the region, often focused on America’s support of Taiwan, which China regards as a breakaway province and threatens to use force to block any Taiwanese bid for formal independence.

In recent weeks, territorial disputes between China and Japan over a string of uninhabited islands have inflamed the region and raised worries that the United States may back the Japanese.

The United States also has been very vocal in blaming China for cyberattacks that emanate from the country and steal critical data from US government agencies and American companies.

“We must be clear-eyed about the challenges and difficulties that we face as two major powers,” Panetta told the military crowd. “We will not agree on every issue that comes before us. But we cannot let those disagreements and those challenges blind us to the great opportunities that exist.”  AP