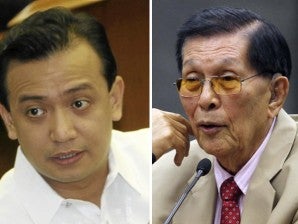 MANILA, Philippines – Senate President Juan Ponce-Enrile finally identified Senator Antonio Trillanes IV as the brains behind a plot to oust him as the chamber’s leader.

Enrile made this disclosure in a television interview hours after he traded accusations with Trillanes during session in the Senate Wednesday noon.

“I learned that he’s the only one making such remarks and he was spreading word at dinner meetings with reporters I would be booted out,” he said.

“I said that’s OK, don’t keep it a secret anymore. Just tell me if you don’t want me anymore and you have the numbers …I won’t stay a minute and I will offer the seat to Trillanes if he wants to,” the Senate leader added.

Enrile had earlier disclosed receiving information that a senator made mention about the alleged plan to remove him from his post. He refused at that time to name the senator.