Aquino: I prefer to pick up the can | Inquirer News
Close
menu
search

Aquino: I prefer to pick up the can 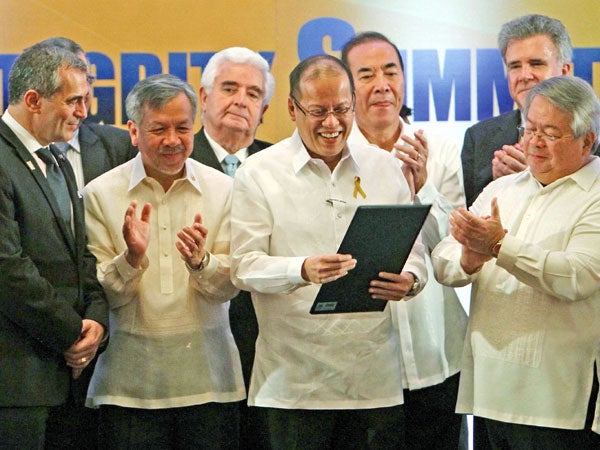 President Benigno Aquino, whose term won’t end until 2016, hopes that his successor is someone who doesn’t kick the can down the road but solves problems.

Speaking on integrity before the country’s CEOs, the President said his goal was to sustain growth and bequeath a country “that is better off than when we arrived” in 2010.

He said this entailed two difficult choices—the right way of doing things and taking a shortcut.

“I am faced with a choice: I can just kick the can down the road, and let the next set of leaders deal with this problem. After all, the politically prudent thing to do would be not to rattle the cage, not to make any noise about something that is, at the moment, not yet an issue,” the President said at the 2nd Integrity Summit at the Hotel InterContinental in Makati City.

But the President said he had a mind-set different from typical politicians’.

“I prefer to pick up the can rather than kick it down the road. I’m here to solve problems, and I believe a person of integrity is also a person of foresight—he will not pass on a problem to someone else when he can solve it himself,” he said.

On his appearance for the second year in a row at the Integrity Summit, Mr. Aquino said he was looking forward to the next summit.

“And perhaps, God willing, I will still be around to witness the succeeding ones after I step down from office which will happen in three years and nine months,” he said, drawing laughter from his audience. “By then I hope there will be even more people who will recite the pledge of integrity and live up to it in their everyday actions.”

Then he also expressed this hope: “That whoever stands on this podium in the future will be a person of foresight; someone who definitely will not kick the can down the road; someone who will solve problems; someone who will fortify the culture of integrity that we are building now.”

The Integrity Summit was organized by the Integrity Initiative of the private sector that seeks to promote common ethical standards among various sectors. The initiative is led by the Makati Business Club and the European Chamber of Commerce of the Philippines.

In his speech, Mr. Aquino said the economy was responding to the culture of integrity that his administration had reestablished.

“If achieved, this could open up Philippine bonds to a whole new set of buyers and possibly lead to even lower borrowing costs,” he added, citing the Philippines’ jump to the 65th rank in the World Economic Forum’s Global Competitiveness Report, and the 5.9-percent growth of the gross domestic product in the second quarter.

These economic gains have been translated into programs and projects, the President said.

For instance, of the proposed P2-trillion national budget,  P698.8 billion has been allocated for social services, up by 13.9 percent from this year’s P613.4 billion.

Also in June this year, the government released P151.6 billion out of the P205.8 billion set aside for infrastructure, he said.

“The bottom line of our strategy is ensuring a level playing field: One that is stable, rules-based and whose outcomes are predictable,” he said.

“But the best-laid plans can be derailed when rules change and when decisions are based on whims, sometimes to serve the interests of but a few. This is what we have tried to change since we took over office; this is the rationale behind our agenda of integrity-based governance. We believe that a level playing field—in essence, a just society, built upon institutions that are fortified by the people’s trust—is the foundation of sustainable growth,” the President said.

Read Next
DENR: PH forest lands down to 9M ha
EDITORS' PICK
Experience clearer calls nationwide with Smart VoLTE
UP law prof Ryan Oliva missing; family cries for help
After weeks of delay, formal transition of power to Biden begins
Public warned against use of fake CopperMask
‘I believe I can win’: Hidilyn Diaz all eyes on Olympic gold
Working from home can be smooth and manageable if you master these tips
MOST READ
UP law prof Ryan Oliva missing; family cries for help
LPA may affect Mindanao by weekend; rain looms over eastern PH due to frontal system
Duterte can’t probe lawmakers? Lacson, De Lima see inconsistencies
Zia Dantes ‘kilig’ after receiving birthday greetings from idol Sarah G, YouTube stars
Don't miss out on the latest news and information.