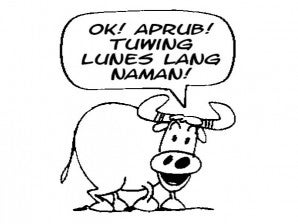 On October 1, expect lunch around the world to be a gastronomical Earth Hour.

Vegetarians are behind it, and they are campaigning for meatless lunches on Mondays on the scale of a global feast, not only to promote good health but also to help mitigate the effects of climate change.

Spearheading the campaign is Luntiang Lunes (Green Monday), which on Monday launched the drive for a World Meatless Lunch, hoping it would develop into an annual observance similar to Earth Hour, which the World Wildlife Fund launched in 2007.

The global meatless feast is set for Oct. 1 with the aim of promoting eating vegetables, fruits and alternatives to meat once a week, with Monday designated as veggie meals day.

“This is an action that will affect the planet and public health, just by eating only vegetables one day a week,” Dr. Custer Deocaris, chair of the Luntiang Lunes movement, said Monday.

The movement is calling on Filipinos to join the campaign by not eating any meat and any meat products, at least for lunch, on Oct. 1.

To drum up the campaign, Luntiang Lunes, together with the Commission on Climate Change, Nurturers of the Earth and other groups, launched the drive and its website, www.worldmeatlesslunch.org, Monday.

The groups hope the call to a meatless lunch will go viral on the Internet, culminating on World Meatless Lunch on Oct. 1—and every Oct. 1 after that.

One plate at a time

“Filipinos, being one of the [peoples] most vulnerable [to disasters caused by climate change], should join the call to reduce global meat consumption one plate at a time,” Frances Quimpo, Kalikasan secretary general, said in a statement posted on the campaign’s website.

To tempt others, the campaign urges netizens to post photos of themselves and their families enjoying meat-free meals.

Deocaris defines “meatless lunch” as a meal that does not include chicken, beef, pork, seafood, fish, animal products and sauces.

The campaign encourages people to organize meatless feasts with friends to widen awareness of the role of livestock in climate change and environmental degradation.

Restaurants can support the campaign by posting photos of their customers eating meatless meals on social networks, Deocaris said.

Deocaris said Filipinos, despite living in an agricultural country, have the lowest vegetable intake in the world, at 39 kilograms per person a year.

“By replacing 25 percent of our meat intake with meat substitutes, we can reverse the effects of climate change within five years,” he added.

Eating vegetables has been linked to a lot of health benefits, including a reduced risk of getting hypertension, cardiovascular ailments, diabetes, cancer and obesity.

Eating meat, on the other hand, encourages the expansion of livestock industries. Environmental studies have shown that 45 percent of the earth’s land area have been cleared for raising livestock, contributing to rising levels of greenhouse-gas emissions that heat up the atmosphere.

Citing data from the International Energy Agency, Deocaris said the world had five years, or until 2017, to mitigate the effects of climate change and global warming to avoid a rise in temperature of 2 degrees to 4 degrees Celsius.

In the Philippines, there are two legislative measures supporting the meatless-meal campaign: a bill in the House of Representatives authored by Bayan Muna Rep. Teodoro Casiño and a proposal in the Quezon City Council introduced by Councilor Jessica Castelo-Daza.

Casiño’s bill would require meatless lunches in public and private schools once a week.

Casiño, who prefers vegetables, said his bill would promote meatless lunches on Mondays to reinforce the old health advice, “Eat your vegetables.”

“For a lot of Filipinos, ‘ulam’ is the main course while ‘gulay’ is the side dish. But vegetables can be the star, too,” Casiño said in an interview.

“We are not forcing other people to abstain from eating meat. But we would like to encourage them to be in solidarity against climate change,” he said.

“That will [send] a very strong message, especially [to] our food industries, to begin having a heart and social responsibility by being kinder to the planet,” Deocaris said.