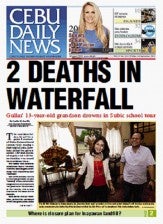 The accidental death of two grade 8 students of Cebu International School (CIS) during a field trip in Subic, Zambales jolted the private school, a favored choice of expats and well-to-do families who enroll their children there.

The bodies were recovered underwater near a waterfall where the boys had gone swimming with classmates last Wednesday.

One of the fatalities was the 13-year-old grandson of Jose “Dodong” Gullas, former Cebu congressman and executive vice president of the University of the Visayas, who is also chairman of the board of The Freeman.

In a statement, the Gullas family asked for privacy to deal with their grief, saying “the matter was under investigation.”

“Kyle was part of a class tour made up of 41 students from the Cebu International School,” said the statement which gave scant details.

Kyle’s remains arrived yesterday and were brought to the Crystal Palace of Cosmpolitan Funeral Homes in Nivel Hills, Cebu City for a vigil wake.

Parents of the Korean student are due to arrive from Korea today.

School field trips to different parts of the country were immediately cancelled and CIS students were sent home to Cebu, with some arriving yesterday.

No classes were held this week in CIS middle school and high school as part of their celebration of Philippine Week.

The accident occurred about 3 p.m. last Wednesday in Subic.

The grade 8 students went to Kanawan Elementary School for a feeding program and distributed school materials to local students, according to an ABS-CBN TV Patrol report,

They later were taken to Kariukan Falls, a local tourist spot, for swimming.

As they were about to leave the place, four students jumped into the water, which local guides had earlier said was off limits.

Paula Ruela, head of CIS Marketing and Public Relations, said parents were informed about the tragedy and field trips were cancelled.

The children were sent home to Cebu and given counselling sessions to deal with the traumatic incident, she said.

The school will meet today with parents of 380 students to further discuss the accident.

The tragedy was briefly reported in the school’s website.

Deidre Fischer, CIS superintendent, posted on the day of the accident that Korean student Jae Hak (James) Jung was fatally injured while swimming near a waterfall while an “underwater search” was going on for a second student who was still missing.

Kyle ‘s identification as the second fatality came a day later at 12:30 p.m. after the Gullas-Weckman family verified the body that was found at the bottom of the lagoon.

Updates were also posted about the arrivals of students from grade 5 to 12 back in Cebu on Thrusday and Friday.

Fischer confirmed that the body of Jung was at a funeral home in Makati City and that his parents were expected to arrive from Korea.

Today, the private school in the upland barangay of Pit-os, Cebu City will have a meeting with parents, faculty and students.

“Our thoughts and prayers continue to be with both families at this very tragic time. We will hold a community-wide meeting, tomorrow, Friday, September 14, 2012 at 1 p.m. t the school,” Fischer said in a statement posted yesterday.

The rest of the Gullas-Weckman family statement:

“We regret to say that no other details can be provided as the matter is still being investigated. In the meantime, we ask to be indulged some private moments to deal with our grief. Any further announcements will be made when details permit. For the moment this is all we can share with the public. Thank you for your kind understanding. And to those who helped us deal with the situation, our deepest and sincerest gratitude.”/With Correspondent Joy Cherry Quito