Palace: Virgilio Garcillano to tell all 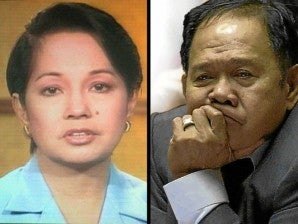 The Aquino administration is forming a virtual “who’s who” of poll manipulators to be topbilled by Virgilio Garcillano, the voice behind the “Hello Garci” scandal, in a fresh bid to prosecute former President Gloria Macapagal-Arroyo.

In a phone interview on Wednesday, Presidential Adviser on Political Affairs Ronald Llamas said that Garcillano, a former election commissioner, had sent feelers to Malacañang expressing his willingness to finally “tell all” against Arroyo.

Llamas, however, refused to elaborate, stressing that Malacañang never sought out Garcillano, whose potential blockbuster could be the latest in a series of revelations pinning down Arroyo from accused mass murderer Zaldy Ampatuan and newly surrendered fugitive Lintang Bedol.

“There are other witnesses coming out including Garcillano. We are waiting for them. We are planning to create a body of whistle-blowers, a legitimate group to testify against Arroyo,” Llamas said.

Bedol, a former election supervisor in Maguindanao, surfaced on Tuesday after four years in hiding. He submitted an affidavit to the Commission on Elections (Comelec) purportedly detailing the rigging of the 2004 and 2007 balloting in Maguindanao province, allegedly on Arroyo’s orders.

Ampatuan, a former governor of the Autonomous Region in Muslim Mindanao detained in connection with the massacre of 58 people in Maguindanao in 2009, earlier last week accused Arroyo, in television interviews and unsigned affidavits, of masterminding vote-shaving and vote-padding operations in the two elections.

Ampatuan has offered to turn state witness and testify in the massacre against his father, former Maguindanao Gov. Andal Ampatuan Sr., and brother Andal Jr. The three are in jail, along with 76 others accused in the worst case of political violence in the nation’s history.

Interior Secretary Jesse Robredo, who facilitated Bedol’s surrender on Friday, claimed that three other witnesses in the election cheating were set to come forward and corroborate Bedol’s testimony.

“We need closure and closure can be done by the perpetrators themselves,” Lacierda said in an interview with reporters.

“Garci was the one. The ‘Hello Garci’ thing had a very massive impact on the legitimacy of the Arroyo government. And certainly if Mr. Garcillano can reveal the truth, wouldn’t it be better for Filipinos to have closure in this issue?” he added.

“Certainly, the truth should come out (on) who really won in the 2004 and 2007 elections. Of course, we need to know because when you cheat in elections, you rob the people of their mandate,” Lacierda said.

Raul Lambino, Arroyo’s lawyer, has said the series of fresh accusations against the former President and now Pampanga representative was part of a Malacañang offensive to lift the declining popularity rating of President Aquino before his State of the Nation Address on Monday.

Lacierda said Lambino knew that Arroyo was being “backed up against a corner.”

“We know that the noose is tightening and that’s why he’s talking and he’s trying to misdirect the whole situation and trying to taint whatever revelation we would come up with,” Lacierda said.

Lacierda was asked if Malacañang supported the possibility raised by Justice Secretary Leila de Lima of placing Arroyo on the Bureau of Immigration watch list to prevent her from leaving the country in the face of charges against her.

He said there was basis for De Lima in considering this and added that the Palace would defer to her.

Lacierda said Bedol appeared to be a credible witness. “I think the fact that his name was mentioned in the Garci tapes, that makes him a party who was fully aware of what was going on in the poll fraud and that makes him a source who may appear to be credible,” he said.

He denied an Inquirer report attributed to a source that said that P30 million had been offered to Bedol to surface and pin down Arroyo and another P50 million was dangled to Garcillano to do the same thing.

He also denied that Robredo orchestrated Bedol’s coming out, saying that the interior secretary was not a “stage manager or agent.”

In a phone interview with the Inquirer on Wednesday, Lambino said Malacañang was aware that authorities could no longer go after his client in connection with the 2004 balloting.

“It’s too late,” Lambino said. “The law states that cases must be filed within five years from the commission of the election offense.”

“What they’re doing now is to just shame her before the media,” he said. “The issue will be a convenient cover for President Aquino’s Sona—his ‘state of no accomplishment’—on Monday.”

Lambino downplayed the allegations made by Bedol, saying these were “hearsay, speculative” unless corroborated.

He also said that Bedol would be a questionable witness in the 2004 scandal, noting that he was assigned elsewhere, not in Maguindanao, at the time.

Lambino said that even if the Maguindanao votes were removed, Arroyo would still have won.

The lawyer also brushed aside Malacañang’s suggestion that Arroyo had sought political asylum on her last trip to Europe, which included a stop at the miraculous Lourdes shrine in France.

“This is not well known to the public, but Mrs. Arroyo has a very strong faith, she is very spiritual,” Lambino told Radyo Inquirer.

“They won’t hold water unless corroborated,” Abalos told the Inquirer. “Let’s not take these hook, line and sinker.”

Sen. Francis Escudero, pressing a proposal to conduct a fact-finding inquiry into the 2004 balloting for the sake of history, on Wednesday said Arroyo’s refusal to participate in such an exercise could be addressed with technology.

Escudero said experts could verify if the woman’s voice in the “Hello Garci” tapes belonged to her. “Voice analysis is admissible in court,” he said. (See In the Know on this channel).

Experts were called during hearings conducted in 2005, but the exercise did not result in court litigation. With reports from Christian V. Esguerra, Cathy Yamsuan and Cynthia D. Balana, Dona Z. Pazzibugan and Dona Dominguez-Cargullo, Radyo Inquirer