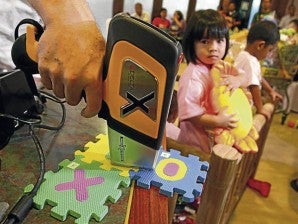 TOXIC TOYS BUSTER. US scientist Joseph DiGangi shows how an X-ray fluorescence analyzer is used to test the toxicity level of toys as children play with safer toys on Wednesday’s presscon by Ecowaste Coalition in Manila. It found 30 percent of 200 local and imported toys was positive for at least one toxic metal above levels of concern. MARIANNE BERMUDEZ

A pro-environment watchdog on Wednesday called on the government to ban the use of chemicals in children’s toys and draft a law protecting them from toxic substances.

Ecowaste Coalition made the appeal after 30 percent of the 200 local and imported toys it recently tested came out positive for “at least one toxic metal above levels of concern.”

In its “State of Toys Analysis,” the group said the toys were bought from bargain stores in Baclaran, Divisoria, “ukay-ukay” (secondhand thrift shops) and shopping malls in Metro Manila.

It added that the tests it conducted jointly with International POPs Elimination Network (IPEN) showed at least 60 toys contained at least one of the following chemicals—lead, mercury, chromium, antimony, arsenic and cadmium.

The toys that were tested included dolls, action figures, toy cars and play makeup like eye shadow and lipstick.

“The findings raise valid safety concerns for toxic exposure among children and send a strong signal to the toy industry to shape up, phase out harmful chemicals in their products and shift to safer ingredients,” said visiting American scientist Dr. Joseph DiGangi, IPEN science and policy adviser.

According to Ecowaste, exposure to any of the chemicals found in the toys can be harmful to one’s health.

Lead, for example, can inhibit “sensory, motor, cognitive and behavioral development” in children which is “irreversible and persists into adolescence and adulthood,” it said.

On the other hand, “mercury is poisonous to the kidneys and can affect the nervous, cardiovascular, respiratory, gastrointestinal, hematologic, immune, and reproductive systems,” the group added.

The chemical can also diminish IQ and even compromise “motor function, attention and visual-spatial performance,” it said.

Ecowaste’s Project Protect coordinator Thony Dizon, meanwhile, called on manufacturers not to engage in the production, trade and sale of toxic toys as he noted that 70 percent of the toys they tested were found to be safe.

He also urged the public to read product labels before purchasing a toy and choose those made from natural materials.