Wave of attacks kills 52 in Iraq 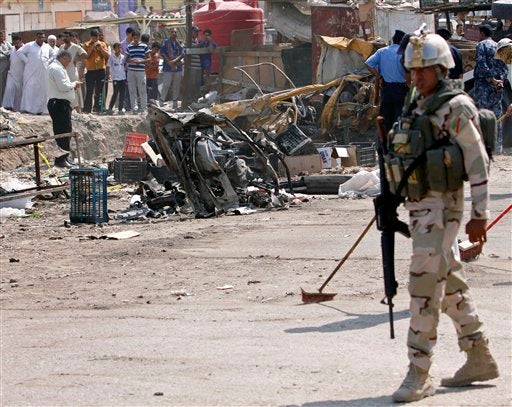 An Iraqi soldier stands guard as security forces inspect the scene of a car bomb attack in Basra, 340 miles (550 kilometers) southeast of Baghdad, Iraq, Sunday, Sept. 9, 2012, in violence, which struck at least 10 cities across the nation. AP PHOTO/NABIL AL-JURANI

BAGHDAD—A series of more than 20 attacks across Iraq killed 52 people and wounded over 250 on Saturday and Sunday, security and medical officials said, with targets including security forces and markets.

The latest violence brings the number of people killed in attacks so far this month to 82, according to an AFP tally based on security and medical sources.

In the deadliest attack on Sunday, two car bombs exploded in a market near the shrine of Imam Ali al-Sharqi in south Iraq, a security official said.

Before midnight on Saturday gunmen opened fire on an Iraqi army checkpoint near Balad north of Baghdad and shortly later a roadside bomb exploded when additional soldiers arrived.

Eleven soldiers, including two officers, were killed and eight others wounded, an army colonel and a medical source at Balad hospital said.

A police captain was also shot dead on Saturday night in the town of Garma, security and medical officials said.

Early Sunday morning a car bomb exploded in a car park at the rear gate of the state-owned North Oil Company, about 15 kilometers (nine miles) from the northern city of Kirkuk, killing seven people and wounding 17 others, police and Dr. Othman Abdul Rahman said.

The victims were seeking to join a force that guards oil facilities, a police officer said.

The North Oil Company is responsible for oil exports from northern Iraq.

The streets were deserted after the attacks.

A car bomb seriously wounded six soldiers west of Kirkuk, according to army Captain Taha Khalaf, while another in Hawija, also west of the city, wounded two people, security and medical sources said.

Volatile, oil-rich Kirkuk province is part of a swathe of disputed territory in northern Iraq that the autonomous Kurdistan region wants to incorporate against Baghdad’s wishes.

Three car bombs exploded in Taji, north of Baghdad, killing one person and wounding at least seven others, an interior ministry official said and a medical source said.

And five roadside bombs exploded in and around Baquba, killing a soldier and wounding 17 others, a police colonel and a doctor said.

In Nasiriyah, 305 kilometers (190 miles) south of Baghdad, a bomb exploded around 9 a.m. (0600 GMT) on Sunday near the French honorary consulate, causing material damage and wounding an unspecified number of people, a French diplomat said.

Nasiriyah’s website put the toll from the bombing at one dead and one wounded.

Meanwhile, a car bomb exploded in front of a hotel in Nasiriyah, killing two people and wounding two others, according to the head of the Nasiriyah hospital Ahmed Abdul Saheb and a security source.

In the southern port city of Basra, a car bomb in a market killed three people and wounded at least 20 others, police and a medical official said.

And south of Samarra, a city north of Baghdad, another car bomb killed two police, including Colonel Thair Idris, and wounded two others, a police lieutenant colonel and a medical source said.

Violence in Iraq is down significantly from its peak in 2006 and 2007, but attacks remain common, and killed 278 people in August according to an AFP tally based on security and medical officials.