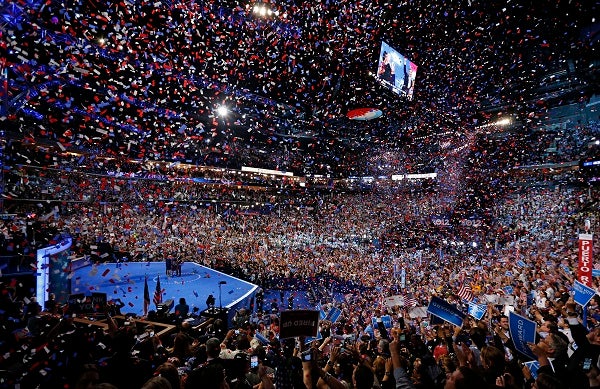 In this Sept. 6, 2012 file photo, President Barack Obama and his family and Vice President Joe Biden and his family celebrate their nominations as the confetti falls at the conclusion of the Democratic National Convention in Charlotte, N.C. Republican National Convention in Tampa, Fla. Message to convention planners: Three days are enough. Both major parties packed their presidential nominating conventions into 72 hours, one day short of the traditional four-day celebration—prompting few complaints from either delegates or the viewing public. AP/Carolyn Kaster

CHARLOTTE, North Carolina—US President Barack Obama accepted the Democratic nomination for a second term on Thursday night, making a forceful argument that he had rescued the economy from disaster and ushered in a recovery that would be imperiled by a return to Republican stewardship.

Four years after fireworks consecrated his storybook campaign to become the nation’s first black president, Obama took the stage on Thursday as a politician who had come down to earth and was locked in the fight of his life against the Republican nominee, Mitt Romney.

The stirring outsider’s message had become a policy-laden appeal for continuity; the mantra of reform was now a vigorous defense of his current course.

Describing himself as “mindful of my own failings,” Obama conceded the country’s continuing difficulties while defending his record and pleading for more time to carry out his agenda. He laid out a long-term blueprint for revival in an era obsessed with short-term expectations.

“I won’t pretend the path I’m offering is quick or easy; I never have,” Obama told a packed arena of 20,000 party leaders and activists. “You didn’t elect me to tell you what you wanted to hear. You elected me to tell you the truth. And the truth is, it will take more than a few years for us to solve challenges that have built up over decades.”

He added: “But know this, America: Our problems can be solved. Our challenges can be met. The path we offer may be harder, but it leads to a better place. And I’m asking you to choose that future.”

The president’s appearance at Time Warner Cable Arena underscored the tumultuous journey he and the country have been on since his first nomination in Denver.

From ‘Change’ to ‘Forward’

The “Change” signs waved in the audience in 2008 had been replaced with placards saying “Forward.” The word “promise,” which he used 32 times in his acceptance speech in 2008, came up just seven times on Thursday night. Even the traditional balloon drop was missing since a last-minute site change made it impossible.

Obama issued a string of promises, including 1 million new manufacturing jobs and $4 trillion in deficit reductions. But he was largely making the case that he had put in place the foundation for a revived country if voters only give it enough time to work.

If at times it had the feel of a State of the Union address, that was an intentional effort to jab Romney to be more specific about how he would carry out his promises, maximizing the gulf between the parties.

“They want your vote, but they don’t want you to know their plan,” Obama said. “And that’s because all they have to offer is the same prescription they’ve had for the last 30 years.”

Obama’s speech punctuated back-to-back political conventions in which the two parties, if nothing else, delivered radically different visions for how to end the economic malaise that has afflicted the country since 2008, and framed the two-month spring to Election Day.

A week after Romney appealed to Americans disappointed with Obama, the president pressed his case that the Republican candidate was so disconnected from the struggles of the middle class that he had no idea how to address them.

In sharp language, he linked Romney and his running mate, Paul D. Ryan, to what he long described as failed trickle-down economic policies that favor the wealthy, reflecting what has become a central theme of his campaign.

“On every issue, the choice you face won’t just be between two candidates or two parties,” Obama said. “When all is said and done, when you pick up that ballot to vote, you will face the clearest choice of any time in a generation.”

The Romney campaign released a reaction to the president’s speech before it was even delivered, assailing Obama as having failed to create enough jobs, cut the deficit in half or increase incomes. “This is a time not for him to start restating new promises, but to report on the promises he made,” Romney said in the taped statement.

Bravery is in the heart

Introducing Obama was Vice President Joe Biden, who offered testimony to the president’s leadership on everything from the economy to the raid that killed Osama bin Laden. “Bravery resides in the heart of Barack Obama,” he said. “This man has courage in his soul, compassion in his heart and steel in his spine.”

Biden was left to take the tougher shots at Romney, the former head of the private equity firm Bain Capital and former governor of Massachusetts. Noting that Romney had promised to take a jobs tour, Biden said, “Well, with his support for outsourcing, it’s going to have to be a foreign trip.”

He noted that Romney opposed the federal bailout of the auto industry. “I think he saw it the Bain way,” Biden said, adding: “The Bain way may bring your firm the highest profits. But it’s not the way to lead our country from the highest office.”

Biden’s nomination for a second term as vice president was approved by the convention by acclamation.

The emotion in the packed hall crested early, when former Rep. Gabrielle Giffords of Arizona, her step faltering, walked tentatively onto the stage in a surprise appearance to lead the pledge of allegiance. Giffords, who was shot in the head by a would-be assassin, is still recovering, and she stumbled over the word “indivisible.”

But she got through the pledge and blew kisses to the crowd, which surged to its feet in ovation, chanting “Gabby! Gabby!”

Given that Romney spent little time on foreign policy during his acceptance speech, it was a foregone conclusion that Obama would devote time to national security, an area where Democrats believe they have carved out a surprising advantage. They paraded a host of war veterans across the stage, some of whom chided the Republicans as taking little notice of them in Tampa last week.

“Ask Osama bin Laden if he is better off now than he was four years ago,” Sen. John Kerry of Massachusetts said, turning a Republican line critical of the president into an argument for his reelection.

Obama said Republicans “want to take us back to an era of blustering and blundering that cost America so dearly,” and Biden appeared to choke up reciting the numbers of the war dead and wounded.

Still, the heart of the argument between Obama and Romney is about the role of government. “This is what the election comes down to,” Obama said. “Over and over, we’ve been told by our opponents that bigger tax cuts and fewer regulations are the only way, that since government can’t do everything, it should do almost nothing.”

Highlighting Medicare, which Ryan has proposed overhauling, the president said, “No American should ever have to spend their golden years at the mercy of insurance companies.”

Obama’s speech culminated a three-day convention that included a retinue of Hollywood celebrities, plus a strong focus on social issues like same-sex marriage.

But like its Republican equivalent last week, it did not always go according to script, including an embarrassing floor fight over Jerusalem as the capital of Israel and a late decision to move the president’s speech to Time Warner Cable Arena from Bank of America Stadium because of inclement weather.

Emotional at the end

With thunder, lightning and rain forecast—convention goers huddled under plastic sheets as they darted between sites—organizers were left with some 65,000 supporters— many of them traveling from all over the country—without the chance to see Obama in person.

The president appeared to become emotional toward the end of his speech, as he spoke of wounded veterans who somehow managed to walk and run and bike on prosthetic legs. He said he did not know if they would vote for him, but added that they nonetheless gave him hope that difficulties could be overcome.