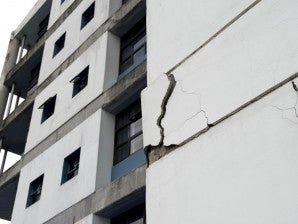 A wall at the University of Costa Rica’s school of electrical engineering is damaged after an earthquake in San Jose, Costa Rica, Wednesday. AP

CANGREJAL, Costa Rica—The bulletins were terrifying: a powerful earthquake had struck off the coast of this Central American country, spawning a tsunami warning and bringing fears of widespread catastrophe.

But Costa Rica suffered remarkably little damage from Wednesday’s magnitude-7.6 quake — a few blocked highways, some collapsed houses and one death, of a heart attack caused by fright. Officials credited the relatively deep location of the quake and building codes that Costa Rican officials call as strict as those in California and Japan.

The quake was 25 miles (41 kilometers) below the surface. Tremors that occur deep underground tend to be less damaging, but their shaking can be felt over a wider area.

“If it was a shallower event, it would be a significantly higher hazard,” said seismologist Daniel McNamara of the U.S. Geological Survey.

The US Geological Survey said the quake was centered about 38 miles (60 kilometers) from the town of Liberia and 87 miles (140 kilometers) west of the capital, San Jose.

The area is a seismically active zone where the Cocos tectonic plate dives beneath the Caribbean plate. “All along the Pacific coast of Central America, you can expect fairly big earthquakes,” McNamara said.

The quake was followed by three strong aftershocks of magnitudes above 4.

The relatively little damage was due in large part to strict building codes in Costa Rica, a country that has long enjoyed more stability, better governance and stronger economic development than many of its Central American neighbors, said Olman Vargas, president of the national College of Architecture and Engineering.

“We have a culture of concrete and steel,” he told The Associated Press. “Years ago we abandoned building in mud and adobe, something that’s caused a lot of problems and that they’re continuing in other countries.”

Costa Rica’s anti-earthquake structural codes have been updated in line with the latest international standards three times since they were enacted in 1974, most recently last year.

“I can assure you we comply with all global standards — the same as in California and Japan, places well-known for their high tectonic activity,” Vargas said.

Officials said the quake collapsed some houses and at least one bridge and caused landslides that blocked highways. But Costa Rica President Laura Chinchilla said there were no reports of major damage.

Residents described being shocked by the force of the quake, which was felt as far away as Panama and Nicaragua and was the biggest since a 7.6-magnitude quake in 1991 that killed 47 people.

Michelle Landwer, owner of the Belvedere Hotel in Samara, north of the epicenter, said she was having breakfast with about 10 people when the quake hit.

“The whole building was moving; I couldn’t even walk,” Landwer said. “Everything was falling, like glasses and everything.” Still, she added, “Here in my building there was no real damage.”

The Guanacaste region around the epicenter is a popular tourist destination known for its pristine beaches and nature and marine reserves. Costa Rica is also a popular destination for American retirees, tens of thousands of whom have settled here.

Officials initially warned of a possible tsunami. Samara local police supervisor Jose Angel Gomez said about 5,000 people had been evacuated from coastal towns in and near the quake’s epicenter, but they were allowed to return by midday.

In San Jose, frightened residents ran into the streets, and cellphone and Internet service failed across the city. Some neighborhoods lost electricity. Services were almost entirely restored by Wednesday night.

At the hospitals of Nicoya and Liberia, in Guanacaste, hundreds of people packed emergency rooms seeking treatment for shock and minor injuries.

One death was confirmed, a man who died of a heart attack caused by fright, said Carlos Miranda, a Red Cross worker in the city of Liberia.

Douglas Salgado, a geographer with Costa Rica’s National Commission of Risk Prevention and Emergency Attention, said a landslide hit the main highway that connects the capital to the Pacific coast city of Puntarenas, and hotels and other structures had cracked walls and items knocked from shelves.

In the town of Hojancha, a few miles (kilometers) from the epicenter, city official Kenia Campos said the quake knocked down some houses and landslides blocked several roads.

“People were really scared … We have had moderate quakes but an earthquake (this strong) hadn’t happened in … years,” she said.

In the last four decades, the region has been rocked by 30 earthquakes of magnitude-6 and larger. Two exceeded magnitude-7 — in 1978 and 1990 — but did not cause any deaths.

The last deadly quake to strike Costa Rica was in 2009, when 40 people died in a magnitude-6.1 temblor.

Read Next
Binay hails House passage of Kasambahay Bill
EDITORS' PICK
Nestlé Philippines’ ‘NESCAFÉ Plan’ bags Grand Anvil at PRSP 56th Anvil Awards
Smart reinforces superiority with best speed and mobile video experience in PH
Every Filipino home can now be a smart home with realme TechLife
New 3,045 COVID-19 cases push PH total active cases to 40,074
LTO’s P500-M deal for screws draws scrutiny
How to lose a PH genius: Wesley So officially a US citizen
MOST READ
How to lose a Filipino genius: Wesley So officially a US citizen
US lays out list of aid to ‘satisfy’ Duterte following VFA payment demand
Robredo on Sara Duterte leading poll surveys: Why are Filipinos drawn to leadership of this kind?
Rights lawyer survives attack by playing dead, loses all case files
Don't miss out on the latest news and information.