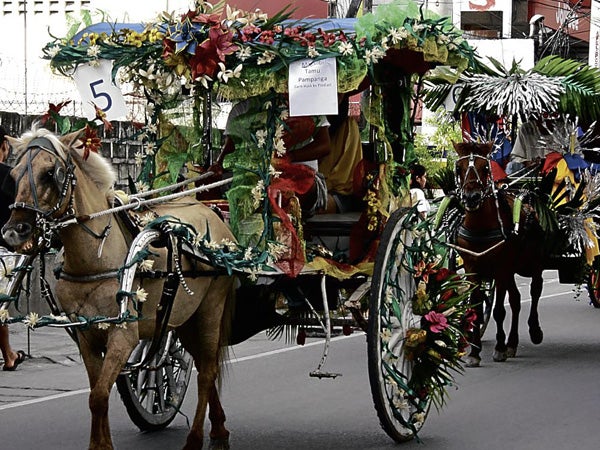 CITY OF SAN FERNANDO—In 2004, only 120 calesas (horse-drawn carts) plied the streets of this Pampanga capital every day. As of August this year, that fleet of calesas has grown to 156.

“The increase may be slight but that’s a sign that calesas and their drivers are not yet a dying breed in San Fernando,” says City Administrator Ferdinand Caylao.

He says the city government is helping avert the extinction of the calesa amid tough competition from hundreds of pedicabs.

To what lengths has the government gone to preserve this iconic trade?

First, among public conveyances, the calesa is the only public transport unit allowed to make the rounds of the poblacion (city proper) and nearby villages.

Second, every two years, they get a makeover from students and local artists.

Third, drivers are trained as tourist guides, a value-added trade that helps them earn more.

Fourth, the city government has organized the City of San Fernando Kalesa Association, which has inputs on the way traffic discipline and public safety concerns are enforced.

“In the city government’s objective of creating a sense of pride of place, these calesas are part and parcel [of the local culture] because these reflect our city’s heritage,” Caylao says .

“It helped that Mayor (Oscar Rodriguez) understands the lives of kutsero (drivers) because when he was in high school, he lived among them,” he says.

Because it is valued in this city, the calesa became part of the recent celebration for the 258th founding anniversary of San Fernando and 108th anniversary of the transfer of the provincial capital from Bacolor to this city.

During Spanish colonial times, the calesa was the public mode of transportation.

In the annual Kalesa Festival on Aug. 31, Francisco Bala won the contest for the best-dressed cart. His was decorated with corn husks. Gloria Millare came in second for her use of water lilies as decor.

Bala designed the calesa of Marvin Magtoto who, at 34, is a third generation kutsero.

His late grandfather Danilo and his father Oscar, 65, drove the calesa as their primary source of living. Magtoto’s brother, Michael, has followed in their elders’ footsteps.

He enjoys guiding tourists to restaurants and heritage houses because most pay well. “Others just ride to get a feel of what it is like to ride a calesa,” Magtoto says. “Some mothers stop their young children from crying or put them to sleep by giving them a calesa ride.”