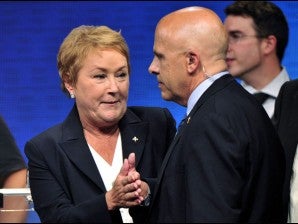 Parti Quebecois Leader Pauline Marois speaks with a member of her security detail after being whisked off the stage by Surete du Quebec police officers as she delivered her victory speech in Montreal, Que., Tuesday, Sept. 4, 2012. Police were not immediately able to provide details but party organizers informed the crowd that there had been an explosive noise and they needed to clear the auditorium. (AP Photo/Paul Chiasson, The Canadian Press)

MONTREAL — A gunman opened fire during a midnight victory rally for Quebec’s new premier, killing one person and wounding another. The new premier, Pauline Marois of the separatist Parti Quebecois, was whisked off the stage while giving her speech and uninjured.

It was not clear if the gunman was trying to shoot Marois, whose party favors separation for the French-speaking province from Canada. Police identified the gunman only as a 50-year-old man and said he opened fire in the back of the hall while Marois was giving her victory speech to hundreds of supporters at the Metropolis auditorium. The gunman then fled outside where he set a small fire before he was captured, police said.

Police said they didn’t know the gunman’s motive, but said that as he was being dragged toward the police cruiser, the suspect shouted in French, “The English are waking up!”

Marois, the province who had been celebrating become returned to the stage after the shooting and asked the crowd to peacefully disperse. The attack shocked Canadians who are not used to such violence at political events.

The suspect was wearing a blue bathrobe over black clothes. Camera footage showed a pistol and a rifle at the scene. Emergency medical workers said one victim was pronounced dead at the scene and a second person was wounded. A third person was treated for shock.

The separatist party won the election, but failed to win a majority of legislative seats. Though the Parti Quebecois wants the province to break away from Canada, its victory is unlikely to signal a new push for independence. Opinion polls show little appetite for a separatist referendum after previous ones had been rejected by voters in 1980 and 1995. Marois herself has left much uncertainty about if and when one would be held. But her party will push for more autonomy from the federal government.

The attack took place just after Marois began speaking in English — a rare occurrence in a speech at a partisan PQ event. She had promised English-speaking Quebecers that their rights would be protected, following an emotionally charged campaign that saw her party focus on language-and-identity issues. Earlier in the evening, people in the crowd booed when they heard outgoing Liberal Premier Jean Charest speak English in his concession speech. Charest spent nearly 10 years in power.