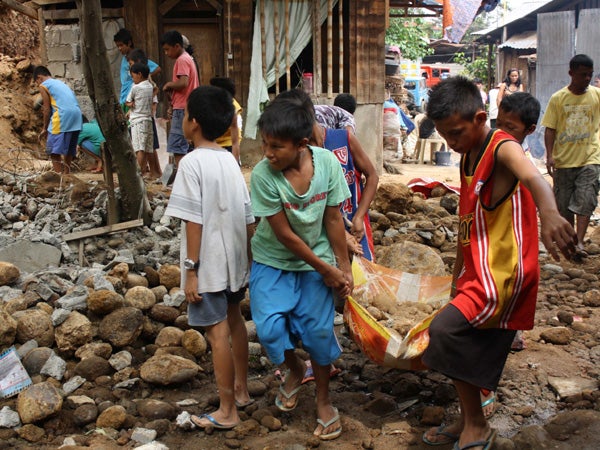 Children of Upper Kolambog, Barangay Lapasan, Cagayan de Oro City help out in clearing debris from a house that was destroyed by a landslide triggered by the earthquake that struck at about 8:47 pm, August 31, 2012. The landslide killed 44-year old resident Emelita Ubalde and injured her 4-year old grandson Adrian Rosales. PHOTO BY JB R. DEVEZA

General MacArthur, Philippines – Families returned to their quake-devastated homes in the central Philippines Sunday, ignoring government warnings to relocate away from danger zones.

Men, women and children picked through the debris in the quiet fishing town of General MacArthur looking for materials to salvage from their splintered wooden houses.

The area faces the Pacific Ocean on the country’s eastern seaboard, where a 7.6-magnitude offshore quake struck Friday, triggering a tsunami alert that forced over 130,000 people to flee.

“We thank the Lord that no big waves came, but still, the earthquake destroyed our home,” said Rosel Aruera, a 20-year-old mother of two, as she surveyed her the remains of her home.

“It was so strong we were thrown off our bed and minutes later our floor and walls crumbled.”

Hers was among 80 seaside homes built on stilts using cement and wood, common structures in many coastal areas across the Philippines.

“We have nowhere else to go, that is why we are trying to rebuild here,” she said.

“All of their houses have been destroyed, and now they are trying to rebuild on the same spot. But what happens when another earthquake or tsunami comes?” he said. “That would be a nightmare.”

The quake, which triggered landslides in which one woman died, also sparked tsunami warnings as far away as Indonesia, Japan and Papua New Guinea.

Waves of up to half a metre (20 inches) hit parts of the Philippines’ eastern coast but were not high enough to cause any damage.

The National Disaster Risk Reduction and Management Council (NDRRMC) in Manila said most of the homes destroyed were those made of light materials, while overall damage to infrastructure remained minimal.

But NDRRMC chief Benito Ramos said the quake served as another reminder for many local governments to improve disaster preparedness and relocate entire villages away from danger zones.

“We are lucky this time. But we can’t count on luck all the time,” he said. “We also understand that politically it is easier to say they will relocate communities, but it is more difficult to implement.”

The Philippines is one of the most disaster prone countries in the world, with an average of 20 typhoons battering the island nation every year.

It also sits on the Pacific Rim of Fire – a belt around the Pacific Ocean dotted by active volcanoes and unstable ocean trenches.

Heavily populated urban areas on the Philippines’ main island of Luzon, including the capital Manila, sit on or are near at least four fault systems.

The most active of these, the Valley Fault System, cuts through the eastern section of the island, including across Manila and suburban areas to the south.

That fault moves once every 200 to 400 years, the last time in the 17th century, seismologists said.

Ramos said a 2004 study jointly carried out with Japan said a movement of the Valley Fault System could trigger a 7.2-magnitude quake, flattening 40 percent of all buildings in Manila, a city of 15 million.

Tens of thousands would also die, he said.

“Friday’s earthquake off the coast is reminding us that that these faults could move any time,” Ramos said.