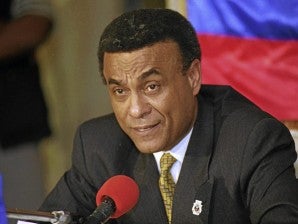 In this Sept. 28, 1985 file photo, Haitian Prime Minister Smarck Michel gives a press conference at his office in Port-au-Prince, Haiti. Michel’s son Kenneth Michel says his father died the morning of Saturday, Sept. 1, 2012 at home from a brain tumor. He was 75. AP FILE PHOTO

PORT-AU-PRINCE, Haiti – Smarck Michel, a businessman who served for almost a year as Haiti’s prime minister after the United States restored President Jean-Bertrand Aristide to power in the mid-1990s, died Saturday, his son said. He was 75.

Kenneth Michel said his father died in the family home in a neighborhood above the capital of Port-au-Prince following a brain tumor.

Smarck Michel was born March 29, 1937, in St. Marc, a port city north of the capital, and moved around the country during his childhood because his father was serving in the Haitian armed forces.

Michel attended college in New York, then returned to Haiti in the 1950s to help run the bakery his father had started. He later ran a grocery store in downtown Port-au-Prince.

Michel became prime minister in 1994, one month after a U.S.-led multinational military force restored Aristide to the presidency after three years in exile. Aristide’s first term was cut short in 1991 when the army ousted him in a coup.

The choice of Michel was seen as an effort to placate business leaders and many in Haiti’s small middle and upper classes who felt threatened by the return of Aristide, a populist left-leaning former Roman Catholic priest. Michel resigned almost a year later over opposition to his economic reforms, which advocated a privatization plan that was unpopular with Haiti’s poor majority.

Before he became prime minister, Michel served as commerce and industry minister for nearly four months in Aristide’s first government, in 1991. He also financed several of Aristide’s endeavors, including an orphanage for street kids.

Michel was dismissed from the post by Aristide amid criticism that the government was unable to lower prices for food and other basic goods. Michel had instituted price controls, but they were widely ignored.

After his brief stint in politics, Michel returned full-time to the family grocery store until he closed it in 2010 and retired, his son said.

In addition to Kenneth, Michel’s survivors include his wife of 53 years, Victoire Marie-Rose Sterlin, and daughters Patricia and Marjorie Michel.