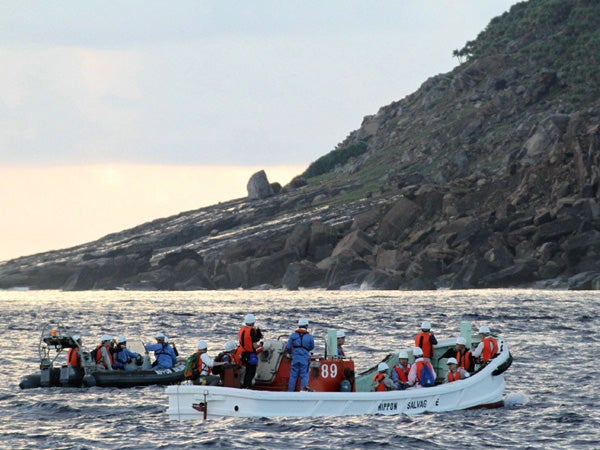 A team of Japanese surveyors conducts an offshore survey from boats near Uotsurijima island, part of the disputed island chain known in Japan as Senkaku and Diaoyu in China, on September 2, 2012. A team of Japanese surveyors on September 2 sailed to a group of disputed islands in the East China Sea which the nationalistic governor of Tokyo wants to buy amid a widening diplomatic row with China. J AFP PHOTO / JAPAN POOL VIA JIJI PRESS

TOKYO – A team of Japanese surveyors Sunday sailed to a group of disputed islands in the East China Sea which the nationalistic governor of Tokyo wants to buy amid a widening diplomatic row with China.

Tokyo Governor Shintaro Ishihara, known for his outspoken views, dispatched the team, which arrived at the island chain claimed by both countries, known in China as Diaoyu and in Japan as Senkaku.

Ishihara wants to buy them from their private owners to highlight Japan’s claim and build a small harbour for fishing vessels.

The 25-member team remained on their boats to survey the shoreline and waters around the rocky uninhabited isles, Japanese television showed.

The national government rejected their request to land on the islands.

“Seeing it with your own eyes is different from seeing them on a map,” Seiichiro Sakamaki, the Tokyo official leading the team, told Japanese television networks as he stood aboard a survey ship near the islands.

“The scale and size are very clear to see. The governor has asked what could be done to build a small harbour. We want to check the islands with that in mind,” he said.

Ishihara has previously said he hoped to visit the islands himself in October when he sends another survey mission.

Testy Japan-China ties again turned for the worse in August after pro-Beijing activists landed on one of the islands which are controlled by Japan. They were arrested by Japanese authorities and deported.

About a dozen Japanese nationalists raised their country’s flag on the island days later, prompting protests in cities across China.

The car of the Japanese ambassador was targeted in Beijing when an unidentified man ripped the national flag off the vehicle.