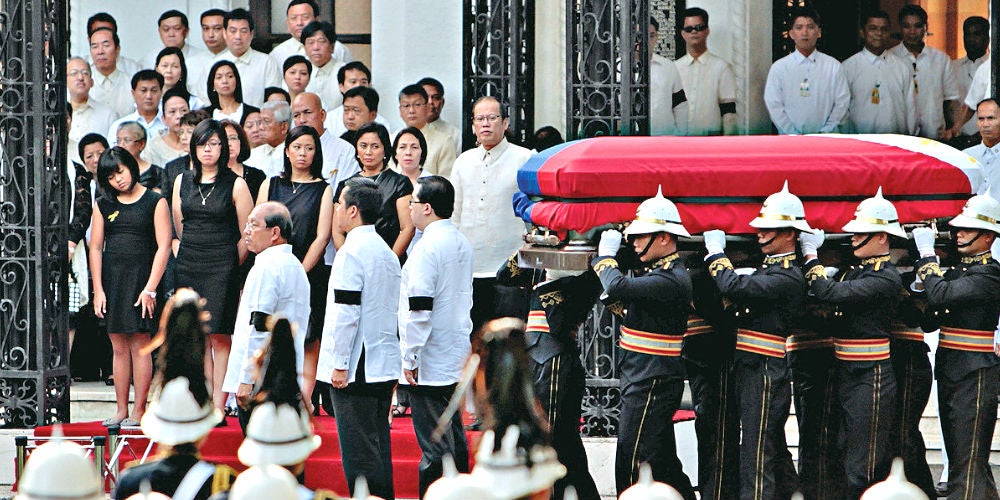 SENDOFF RITES President Aquino watches honor guards carry the flag-draped casket of Interior Secretary Jesse Robredo during the departure ceremony at Malacañang on Sunday. Robredo’s remains were flown to his hometown, Naga City, on the same day. Beside the President are the late Cabinet member’s wife, Leni, and daughters Aika, Patricia and Jillian. GRIG C. MONTEGRANDE

Whether responding to disasters or planning how to rescue flood victims at emergency Cabinet meetings, Jesse Robredo would always turn up looking so cool in tsinelas (rubber slippers). The image defined him, and Energy Secretary Rene Almendras, speaking at a necrological service for the late secretary of the interior in Malacañang on Saturday night, called it Robredo’s “tsinelas brand of leadership.”

It was the last night of the state vigil for Robredo in the Palace and members of the Cabinet gave their departed colleague a merry, song-filled tribute before his family took his body back to his hometown in Naga City on Sunday morning.

The colleague Cabinet members called “Pogi”—handsome —died in a plane crash in Masbate province on August 18, leaving President Aquino suddenly without a popular and respected ally to handle the consolidation of local power as his administration faced its first local and congressional elections next year.

As mourners filed past Robredo’s bier at Kalayaan Hall, they performed Robredo’s favorite songs in between eulogies, drawing smiles from the President and Robredo’s widow, Leni, and daughters Aika, Patricia and Jillian.

In his eulogy titled “Tsinelas,” Almendras recalled that when Aquino called an emergency meeting in the military headquarters in the aftermath of the August 7 massive flooding in the capital, he was amused to see Robredo looking so cool in rubber slippers.

Days later, he said, when the President and the Cabinet officials motored to evacuation centers, Robredo disappeared from the van, but showed up later on stage, wearing slippers. Robredo came prepared, as they waded in floods at the entrance to a school in Valenzuela City.

“He’d tell me: ‘Pare, this is the right footwear for floods. Flood victims use slippers,’” Almendras said. He described Robredo’s tsinelas leadership as a “pragmatic” and “a more demonstrative version of servant leadership.”

As Almendras sees it, Robredo’s leadership has many features. The first, Almendras said, is willingness to wade in floods and travel to the most far-flung areas “to be with the most disadvantaged people.”

“We all know Secretary Jesse rarely said no. That’s why he was one of the most well-traveled Cabinet members. He went to many places where some of us could not go to,” he said.

The presence of mourners from Mindanao during the first night of the vigil on Friday was a testament to how far Robredo would go “just to reach people,” he added.

Another characteristic of Robredo’s leadership, he said, was breaking down the barriers “between us and the people we serve.”

“Many years ago, a young architect told me: I will design it so nicely so that those shod in slippers will be shy to get in. We’re here in Malacañang; we’re here at Kalayaan Hall. Look around you. This place was not designed for tsinelas. And yet last night, and throughout most of today, how many thousands of slippers came into this room to pay tribute, to pay homage and honor to Secretary Jesse?” Almendras said, referring to the mourners filing into the American-era hall to pay their last respects to Robredo.

“Leaders must be acceptable, accessible to those they serve. That was Secretary Jesse Robredo,” he added.

And, of course, what is tsinelas leadership but being casual with people?

More important, this kind of leadership all boils down to base-level transformation, he said.

“It’s about transforming the expectations of people from their leaders so that the next set of leaders will be better than the good ones we now have. Tsinelas leadership is about working on the basics, no frills, something as uncomplicated and casual as the tsinelas but with a very, very clear vision. That was Secretary Jesse Robredo,” Almendras said.

A day before Robredo died, Almendras said he got a call from the interior secretary who sounded so concerned about why floodwaters in Bulacan, a province north of Manila, had not subsided and what could be done about it.

Almendras said he promised to bring it up with Public Works Secretary Rogelio Singson.

“The very last line he told me was: ‘All right, pare. Our countrymen are really in a pitiful state.’ That is tsinelas leadership. A genuine concern and care for the people that we serve. That is Secretary Jess Robredo in its true context,” Almendras said.

“My wish and prayer is the tsinelas leadership begun by Secretary Jess will become fashionable,” he said. Then turning to Robredo’s widow, he said: “Attorney Len, Pogi is also a fashion trendsetter. It won’t be far-fetched for candidates in 2013 to campaign in tsinelas. I hope this won’t just be for picture-taking. I hope they will step up to the standards that have been set by Secretary Jess Robredo, and that they will be worthy to wear the tsinelas.”

After the eulogies, the Cabinet officials rose from their seats and proceeded to the front of the bier and, clutching copies of lyrics, they sang Robredo’s favorite songs, “Impossible Dream” and “My Way.”

They ended Frank Sinatra’s famous song with the lyrics: “It was Jesse’s way.” Strategic Communication Secretary Ricky Carandang, the emcee, later said, “You know, I always hated that song, but tonight I liked it.”

The Cabinet dedicated their third and final song, The Stylistics’ “Betcha by Golly, Wow” to Leni Robredo, with Justice Secretary Leila de Lima leading. The song was the Robredo couple’s favorite.

At the start of the Cabinet memorial service, Noel Cabangon performed two songs, setting the tone for a night of entertainment and laughter.

Budget Secretary Florencio Abad, Robredo’s colleague in the Cabinet and in the Liberal Party, said he and Finance Secretary Cesar Purisima discussed the meaning of Robredo’s passing.

“Cesar remarked: ‘Pare, what happened to Jesse is difficult … If we die, and we don’t get this kind of outpouring of grief, they might say we’ve done nothing,’” he said, drawing laughter. “Maybe, you should immediately get cremated.”

But then Abad said Robredo was a “tough act to follow,” saying he set an extraordinary standard as a public official, family man and servant of God.

“I, myself, have been grappling with this question and it’s clear to me that Jesse’s death isn’t the loss of this administration alone, it is the entire country’s. And our loss is defined first and foremost by Jesse’s uncanny, almost unmatched ability to navigate the delicate complexities of public service,” he said.

The sum of his achievements was founded on a basic truth: That Jesse was a “good man,” Abad said.

He wondered if it was coincidence that Robredo’s body was recovered on the 29th anniversary of the assassination of the late Senator Benigno Aquino Jr. when he returned from exile in the United States on August 21.

“Perhaps, perhaps not. But judging from the grief that swept the nation, judging from the public clamor for a new hero like Jesse, his passing invoked in us a renewed sense of commitment in much the same way as Ninoy’s death became Jesse’s impetus for public service,” Abad said.

“And here we are now at the very cusp of a revolution that the unprecedented election of our dear President Aquino into office catalyzed and which Jesse’s narrative further enhanced: A movement for effective, transparent and accountable governance and a call for the empowerment of all Filipinos, especially the poor and the disadvantaged,” Abad said.

The three-day state vigil for Robredo in Malacañang ended Sunday morning, with President Aquino leading departure honors for him at Kalayaan Hall before his remains were flown back to his hometown.

Archbishop Luis Antonio Tagle of Manila said a predawn Mass prior to the sendoff ceremonies on the Palace grounds.

The President, Leni Robredo and her children, and select members of the Cabinet watched as an honor guard composed of 150 members of the Presidential Security Group rendered departure honors, paying last respects to the late interior secretary with a 19-gun salute.

The hearse bearing the remains of Robredo left Malacañang at about 7:25 a.m. for Villamor Air Base in Pasay City, where planeside honors were given by the Armed Forces of the Philippines before the remains were flown back to Naga.

The plane carrying Robredo’s casket arrived at Naga Airport a little past 9 a.m. A series of necrological services was held, with public viewing commencing at 6 p.m. and lasting until late Monday.

The President has declared Tuesday a nonworking holiday in Naga for Robredo’s interment.

The funeral Mass takes place at Basilica Minore de Nuestra Señora de Peñafrancia at 10 a.m. Tuesday. It will be followed by the rendering of full military honors at 11 a.m., and by the conclusion of the state funeral at Funeraria Imperial, where Robredo’s remains will be cremated.

Aquino will deliver a eulogy at the funeral.