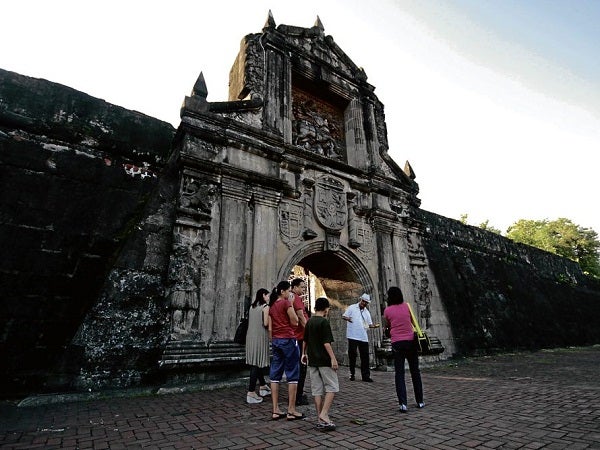 WELCOME SIEGE A guided tour begins at the gates of Fort Santiago in Intramuros. ALANAH TORRALBA

Established in 1571, Intramuros used to be Manila’s beating heart during the three centuries of Spanish colonial rule, the seat of power where political and economic decisions shaping the fate of Filipinos were made.

But today it is a shadow of its old self, crisscrossed overhead by dangling electric cables and blighted with shanties on the fringes, despite past restoration efforts.

The Intramuros Administration (IA) and Gawad Kalinga (GK) are teaming up to take one more shot, through a program dubbed “Caring for the Past, Sharing for the Future.” The first order of business: Relocate the informal settlers now occupying private and public lands in the 64-hectare Walled City.

In an interview during the program launch on Thursday, GK’s Rose Cabrera said the project would involve the relocation of some 3,400 families over the next three years.

A major donor, the Catholic Bishops’ Conference of the Philippines, has already donated a piece of land in Trece Martires, Cavite province, to host a GK village for some of the residents, said Cabrera, director of GKonomiks, a subgroup of Gawad Kalinga focusing on livelihood projects.

The Trece Martires land will be the first “Kalinga Intramuros (KI)” village, she said. The initial plan calls for the setup of at least three KI villages outside Metro Manila, costing P3 million each, to accommodate 100 families, obviously still way below the target.

Cabrera said GK hopes to get more donations soon, as it also plans to build a hostel in Intramuros which can be used by breadwinners or heads of the relocated families who need to work in Manila on weekdays.

GK also plans to provide shuttle service between Intramuros and the KI villages outside the capital. A GK showroom will also be built in the Walled City so that tourists can buy items made by GK beneficiaries from all over the country. 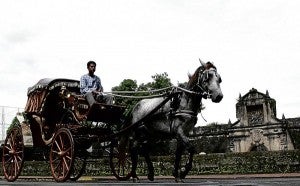 OLD CHARM NEEDS NEW TOUCH A nostalgic Manila ride like this may not draw enough tourist dollars without a sustained revival plan for the Walled City. NIÑO JESUS ORBETA

Cabrera said GK had been holding talks with the families and barangay leaders in Intramuros since last year. Many of them, however, were still reluctant to leave because the area is near their jobs and schools, she noted.

But IA planning consultant Gerry Isada stressed that tourism development in Intramuros will never be fully realized unless the question of the informal settlers is addressed.

“Sustainable tourism development will not happen unless it benefits the majority of Filipinos who are poor. And Intramuros, with its growing number of informal settlers, is a microcosm of Philippine society. Any master  plan must address the growing problem of informal settlers,” Isada said.

He said a five-year master plan which was commissioned by IA Administrator Jose Capistrano was in the works. It would entail a massive rehabilitation and configuration of the area, partly through the Aquino administration’s Public-Private Partnership scheme.

Isada spoke of plans to build pedestrian pathways and limit vehicular traffic. A “heritage trail” will cover not only Fort Santiago, the Spanish fortifications and the churches, but also a Bahay Tsinoy or a museum dedicated to early Chinese-Filipinos, a gallery of modern art to be run by the National Commission for the Culture and the Arts (NCCA), and perhaps another venue retracing the American colonial period. (Isada noted that the Fort Santiago barracks were turned into a restaurant under the Americans.)

With the help of the National Historical Commission of the Philippines and the Department of Education, the IA will also come up with a standardized “script” on the history of Intramuros for tour guides, he said.

The Intramuros of the future will reflect not just the country’s Spanish colonial history, but its entire cultural heritage. Quoting former NCCA chief Felipe de Leon, Isada said: “Culture is nothing else but the genius of the people.”

The Department of Tourism hopes that the transformation would ultimately spur Manila’s revival from being a mere fly-over city to the resort islands into a cultural destination in itself.

According to IA records, locals still make up the vast majority of visitors in Intramuros. In 2010, the visitors reached a total of 410,532, of whom only 107,090 were foreigners.

The new initiative, starting with the mass relocation of informal settlers, hopes to improve those numbers.

“As we transform Intramuros, we transform the nation,” Isada said. For after all, “this is where the Philippines started.”